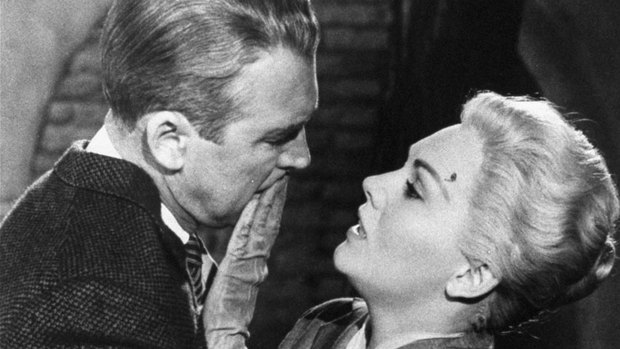 Alfred Hitchcock's Vertigo has claimed the top spot in the list of the 10 greatest movies ever, compiled by the British Film Institute's Sight & Sound magazine.
Hitchcock's classic knocks off another by Orson Welles, whose Citizen Kane had topped the list for the last 50 years.
Starring James Stewart and Kim Novak, Hitchcock's 1958 psychological drama was named No. 1 in the survey of international film critics that the magazine conducts every 10 years.
Once thought of as a genre filmmaker, the British director has attracted renewed admiration as his influence on contemporary directors is reassessed.
Earlier this year, noted Mexican filmmaker Guillermo del Toro showed off his favourite Hitchcock movies during a visit to Toronto and said the British director had created an entire film language that endures to this day. The BFI has mounted a retrospective of Hitchcock's work, including nine little-known silent films, as part of the London Cultural Olympiad.
After having inched up the poll in recent decades, Vertigo received a leading 191 votes from the 846 international film experts surveyed. Citizen Kane, Welles’s 1941 epic about a newspaper magnate, earned 157 votes.
Altogether, more than 1,000 critics from around the world were approached to name their favourite movies. The magazine began polling critics in 1952, with Vittorio De Sica's Bicycle Thieves topping the inaugural tally.
Sight & Sound's longer list of the Top 50 Greatest Films of All Time, posted on its website, includes such titles as Battleship Potemkin, Metropolis, La dolce vita, Seven Samurai, In the Mood for Love and Taxi Driver.