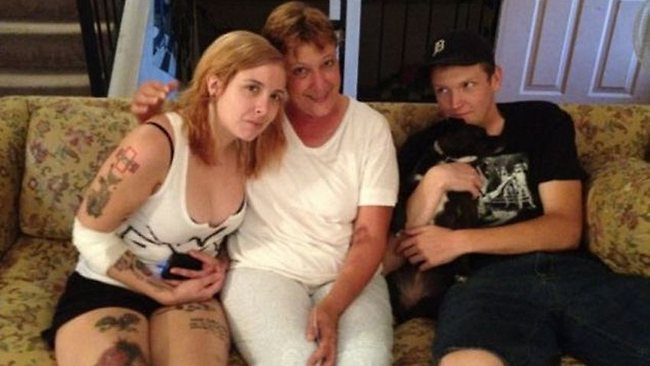 A WOMAN peppered with shotgun pellets during the Batman cinema massacre says the gunman should face the death penalty - by firing squad.
Carli Richards took graphic photos of the wounds she suffered when shot in the right arm, both legs, chest, back and rear as James Holmes went on a shooting spree during the midnight premiere of The Dark Knight Rises in Aurora, Colorado.
By the time his rampage was over, 12 people were dead and at least 58 were wounded.
Calling for Holmes to be put to death, an angry Ms Richards, 22, told TMZ website yesterday: "I think death by firing squad would be totally justified ... just injecting him is painless.
"I had enough needles in me that night to know that a needle isn't that bad. I want him to see what it feels like.
"I wish someone would shoot him and let him bleed out.
"He shot me with stuff they use to shoot birds and deer. I want him to feel what it's like to feel that helpless."
Ms Richards was in Century 16 cinema with her boyfriend Chris Townson when Holmes started the horrifying massacre.
In a blog entry, she described how she thought that when Holmes entered the screening it was a promotional stunt.
Ms Richards was wearing her father's 1980s-vintage Joker T-shirt and seated near the left-hand aisle when the dark figure appeared at the front and tossed a gas canister.
"I heard a weird popping noise and then a can or something came flying towards us," she said.
"The girl next to me and I both swatted at it and it almost hit me in the face.
"In a split second, I recognised that it was tear gas, meaning that this was either a bad joke or it wasn't a joke at all and either way, time to run."
She credits realising it was tear gas so quickly because both she and her boyfriend had trained with the US Navy.
"The next second is a blur, but according to Chris I jumped over him to get out of the aisle and we both ran for our lives."
Only when they reached Mr Townson's car 100m away did Ms Richards touch the right sleeve of her blazer and notice that it was covered with blood.
"My initial reaction to it was, 'It's either fake or it's someone else's blood'. Suddenly, the pain began to sink in," she said.
She was told at the hospital that she had been hit by pellets from a shotgun.
"In my right arm, both of my legs, my chest, my back, and my butt." Ms Richards wrote.
She is still in pain and unable to return to work.
Holmes was charged on Monday with 24 counts of murder and 116 counts of attempted murder in the shooting rampage on July 20. He appeared just as dazed as he did in his first court appearance last week, but at one point exchanged a few words with one of his lawyers.
Each death carried two separate murder charges, one for premeditation and one for showing extreme indifference to life. All the charges carry the death penalty as a possible sentence.