Closing ceremony of the London Olympics 2012

In these past 17 days, London has given the world something to talk about, raised the bar of expectations, satisfied the world’s insatiable appetite for entertainment and they did it with style and pride. But the climax was reached with the smashing success of the closing ceremony of the London Olympics 2012. Featuring more than 4,100 performers, including 3,500 adult volunteers and 380 schoolchildren, the ceremony showcased talent, artistes and creativity with attention to detail, sparing absolutely no expense.
Very honestly, I had heard rumours about The Spice Girls reuniting and taking the stage at the Olympics and my main concern watching the ceremony was to watch them mesmerise the crowd just like they did in the 90’s! But the moment I started watching the ceremony, I was hooked. There wasn’t a scene I wanted to miss or moment I could predict.
Sitting in my room, glued to the television, this was easily the best roller-coaster ride you could have witnessed. From start to end, the closing ceremony was electric. In this blog, I’m going to try and highlight the moments I found to be most captivating.
Rise and shine London!
The event started off with “A day in the life of London” theme, show casing all the landmarks you would see whence awakening for your daily work routine. The theme was enchanting; the landmarks, the people, the cars were all covered in newspaper clippings! What at first glance, seems like rhetoric facts and figures suddenly reveal prose from poems and writings by famous British poets and writers. The glitz and glamour of the London streets at rush hour portrayed here was phenomenal. They captured every detail that comes to life in the wake of morn. If you haven’t been to London and seen the morning hustle-bustle, this would give you a feel of the type of systematic chaos that comes forth.

And then started the clattering and rhythmic beats from within the buildings! Turning the building and everything else surrounding them into musical instruments, thudding and thumping came The Stomps with their percussion routine. They played on everything! Dustbins, buildings, people and finally used brooms, the same ones they just played tunes with, to clean away the newspaper.

Although it may seem like noise and disarray here, shockingly enough, the crowd, including myself, were enthralled! To think you can play a tune on the Tower Bridge!

With Emeli Sande singing in the background I don’t think we had time to get over the view that beheld us, when out popped Winston Churchill from the Big Ben! Pretty much telling The Stomps to shut up, he quoted Shakespeare, as was done in the opening ceremony. 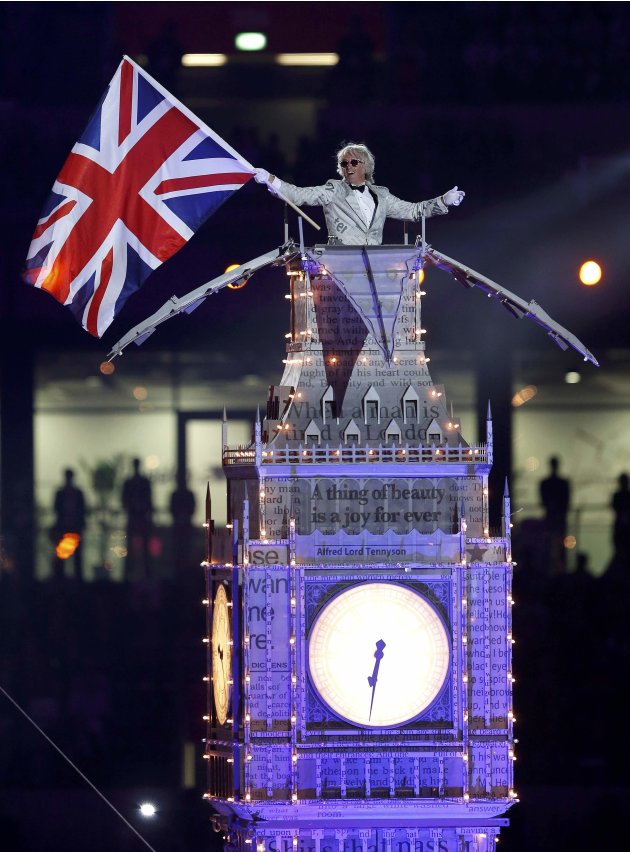 Then came the British national anthem- and a whole new wave of goose bumps! Funnily enough, even though the anthem was not Pakistani, it left me in awe- it made me want to stand up and sing my own national anthem amongst a crowd that big!
Although the purely British theme could have sucked the fun out of certain scenes they were trying to create- like the explosion of a yellow car- which apparently signified a British comedy (please excuse me- very uneducated in that genre I am). The bang in itself with Michael Caine’s voice booming in the background saying “I only told you to blow the bloody doors off!” was hilarious enough- without any background knowledge, not to mention the barrage of colourful balloons that were released!
The Big Bang
Just like the Big Bang, this scenic view of the city of London, covered in newspaper sprawled over a British flag coloured River Thames was pulled apart. Every beginning and end thought out so carefully- down to every little detail, the genius behind this creative masterpiece deserves a widespread applause!
Just as the theme for an early morning London was set forth, thousands of alarm clocks began to blare and beep sounding the arrival of probably what was an evening London – at sunset I suppose.
The event reverberated happiness and peace and just a sense of excited unity as sports usually do. When the athletes came marching in, donning their national flags, with their ridiculously happy expressions, you could just tell that life had changed for them.

Wanna know a fun fact?
The Olympics actually held 303 events!
How do I know that? No, it wasn’t Wikipedia! Because performers brought together 303 white boxes to form a pyramid on which the highlights were all projected! Nostalgia seeped through as visions of happiness and teary moments captured throughout the events burst onto the white pyramid. Factual and fun – I didn’t think you could manage that in one feat. 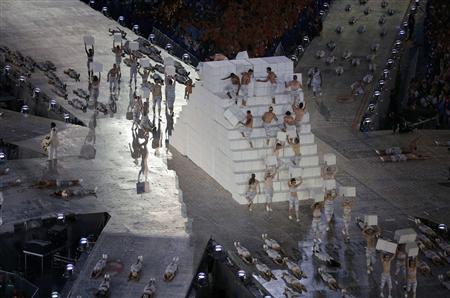 Excitement started breaking through even more, when music legends like George Michael paid a tribute to John Lennon – a silhouetted Lennon that was created for all to see with jigsaw puzzles. Once this was dissembled and after a bunch of British music that was great to hear- but (again excuse the ignorance) did not interest me very much, came what seemed to me like the biggest catwalk. Nine British supermodels strutted their stuff in front of a crowd of 80,000 people- this definitely had to be the biggest ramp ever. I doubt the boys have anything to complain about regarding this event – unlike the opening ceremony where Bond and Beckham (sigh) were drooled over by the girls and the boys tried to conceal their annoyance under stark criticism.

Although I really wasn’t a fan of the songs being sung earlier in the event, the songs and artists that came next, in limousines might I add, were magnificent. With lights, glitter and a massive octopus glamorising their entrance, I hadn’t stopped singing along and dancing to Jessie J’s ‘Price Tag’, Tinie Tempah’s ‘Written in the Stars’ and Taio Cruz’s ‘Dynamite’ when *let the drum rolls begin* came The Spice Girls in five black taxis.

After a ballet performed by the famous black cabs of London, out came Posh, Sport, Baby, Scary and Ginger spice - reunited once again singing ‘Wannabe’ and the crowd burst into screams of joy! Each on the cabs they came from were lit in colours and themes as props to their nicknames- what fun! A wistful cloud of bliss encompassed the fans, me actually, and I really did not want the sequence to end. It was great to see them back together again – giving hopes for a possible reunion, but I regretfully doubt that ever happening. Maybe it’s for the good anyway; I mean who wants to ruin the memories you have with their old songs with new songs that may not do justice to their image.

I’ll try not to get carried away with my antics about the Spice Girls and move to the rest of the event. Although this was the highlight for the girls, many other fans were hoping against hope that they would be able to witness the surprise reunion of the ‘Oasis’ – although their song ‘Wonder wall’ was boomed in the stadium, it was performed solely by Liam Gallagher.
For me, this really was the climax of the event, but was taken a step further when Jessie J returned to perform a rendition of ‘We will rock you’ – and that was it; hearts thumping, ears pumping, and excitement taking over the entire stadium, the effect of this song was electrical.
With entertainment for all ages, they managed to give the boys their dose of eye candy with the supermodels, girls their youth back with the Spice girls and the kids a fill of adventure with the performances, I doubt there is a single thing that comes to mind that you could pinpoint and say was missing from this event! From cars and buildings, to people falling from the sky, to fireworks, the Spice Girls and even supermodels – the razzle and dazzle of this event encapsulated every single detail with flare!

Memories were created and history was made. With a gigantic success like this, setting an even higher standard for entertainment, we can only sit back and anticipate what the next Olympic Games have in store for us.
I’m sure I wasn’t able to encapsulate even a quarter of what the actual event portrayed and may have even missed out on some of your favourite moments, but this was the closing ceremony as I saw it, and it was fantastic!

The Olympic torch being put off until 2016, left many with a sense of sadness at the realisation of its end. Despite Pakistan’s performance at the Olympics, the event was historical and all we can do is hope for a better chance next time around! What a surreal journey it was.
Rio de Janeiro, you have a tough giant to beat in 2016, but I am definitely looking forward to seeing how the glitz of this event will be upped.