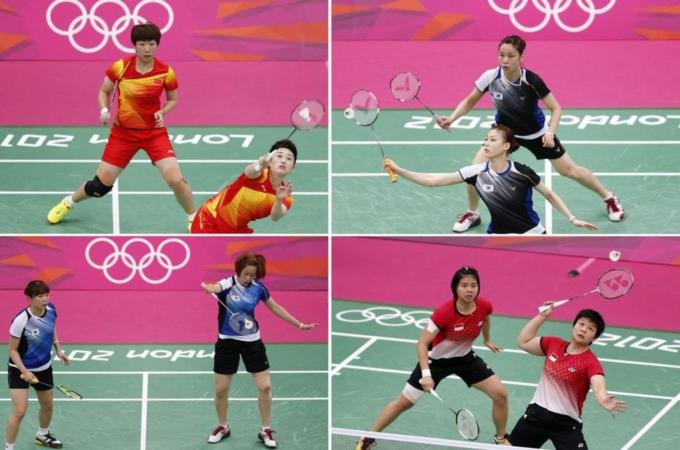 China's Olympic badminton head coach has apologised for his role after his two top players were disqualified for not playing to win.
Coach Li Yongbo said "It's me to blame", while disqualified player Yu Yang declared she was quitting the sport.
Yu was among eight women's doubles players expelled from the Games on Wednesday. The others were team mate Wang Xiaoli, South Korean pairs Jung Kyung-eun and Kim Ha-na, and Ha Jung-eun and Kim Min-jung, plus Greysia Polii and Meiliana Jauhari of Indonesia.
"This is my last competition. Goodbye Badminton World Federation [BWF], goodbye my beloved badminton," Yu wrote on her Tencent microblog. "We ... only chose to use the rules to abandon the match.
"This was only so as to be able to compete better in the second round of the knockout (stage). This is the first time the Olympics has changed the (event's format). Don't they understand the harm this has caused the athletes?
Yu and Wang were the top-seeded pair.
The eight players were turfed out of the Olympics by the BWF for throwing matches in a bid to secure more favourable draws later in the tournament.
The sight of four pairs deliberately easing off disgusted a crowd of 4,800 packed into Wembley Arena expecting to see the best of badminton's best.
The introduction of a round-robin stage in the games, rather than a straight knock-out tournament, meant that losing one game could lead to an easier match in the next round.
Yu's partner Wang also posted comments on her Tencent Weibo, saying that the players were being made to pay the price for the flaws in the new competition rules.

"What you've canceled is not just a game, but my dream!'' she said"
Instead the fans were treated with disdain as the Chinese, Korean and Indonesian players sprayed hopeless shots into the net and beyond the lines. Their antics were also beamed around the globe to a disbelieving audience.
'Publicly apologise'
The Xinhua state news agency said Chinese officials were demanding their disgraced players make a public apology.
"The delegation has already severely criticised and educated the responsible badminton leaders, team and relevant players and demanded they profoundly recognise the seriousness and the harmfulness of this matter, reflect deeply on it, publicly apologise and resolutely prevent such incidents from happening again," Xinhua quoted an unnamed spokesman as saying.
Li Yongbo, chief coach of the Chinese badminton team, said the poor behaviour of his players reflected the shortcomings of the new regulations in the sport.
"I feel that no matter whether it is the rules or something else, that's no excuse," said Li. "The key point is we did not behave professionally as athletes and did not treat each match seriously.
An appeal by South Korea over the disqualification was rejected by the BWF and Indonesia withdrew its appeal.
In South Korea, newspapers largely disapproving of the country's players actions in the scandal, reports said.
One newspaper said the players had ''disgraced the Olympic spirit and embarrassed the country''.