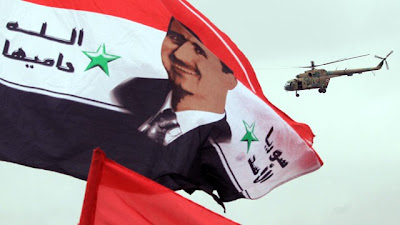 Russia has confirmed for the first time that the cargo ship MV Alaed, which is now headed back to Russia, was carrying refurbished Russian attack helicopters and components for an anti-aircraft defense system that were bound for Syria.
"The ship was carrying air defense systems, which can only be used to repel foreign aggression, and not against peaceful demonstrators, and yes -- it was carrying three refurbished helicopters," Russian Foreign Minister Sergei Lavrov said in an interview with the Russian radio station Echo Moskvy.
The Alaed had to turn back earlier this week as it traveled around Scotland after its British insurer pulled its coverage following pressure from the British government because it was believed to be carrying weapons.
The ship is scheduled to arrive Saturday in the Russian port of Murmansk, which is near its far northern border with Finland, where it will drop its Curacao flag and re-register as a Russian ship.
The Mi-25 helicopters were sold to Syria in the waning days of the Soviet Union and had been sent back to Russia for repairs.
Secretary of State Hillary Clinton complained publicly that Russia was sending the aircraft back to Syria despite reports that the Syrian government had stepped up their use in attacks that have killed civilians.
Russia has come under international criticism for continuing its arms sales to Syria despite the increasing violence over the past year. The Kremlin has argued that there is no arms embargo prohibiting such transfers, though that is true in part because Russia has blocked measures that would impose one. It says the weapons it is providing to Syria are only defensive ones that could not be used in a civilian conflict.

In his interview with Ekho Mosky, Lavrov said it was "completely false" to charge that Russia had "delivered helicopters which were used against demonstrators." He said the choppers aboard the Alaed were disassembled. "They need to be rebuilt, taking around three months."
Still, weapons like the Russian air defense systems could deter international intervention, which Russia remains staunchly opposed to.
Syria is one of Russia's biggest arms clients, with existing contracts worth between $5-6 billion, according to the Stockholm International Peace Research Institute, which tracks arms transfers.
Russia is also one of the largest arms exporters in the world. On Thursday a Kremlin aide said that Russia expects to sell about $12 billion worth of weapons in 2012, up from $11 billion last year.
Numerous Russian news reports say that Russia is preparing to send at least two navy ships to the Syrian port of Tartus, where Russia maintains a ramshackle base and refueling depot. The ships are reportedly carrying hundreds of Russian marines which would secure the base and potentially evacuate Russian citizens from Syria, a sign of the deteriorating security situation in the country. Last weekend the United Nations suspended its monitoring mission in the country because of security concerns.
On Thursday the Russian Foreign Ministry and its embassy in Damascus denied reports that Russia is preparing to evacuate Russian citizens.
On Wednesday the Russian Defense Ministry denied separate Russian news reports that a third ship, from its Baltic Fleet, was also preparing to travel to Syria to aid in the mission.