Stars Whose Parents Have Been Murdered 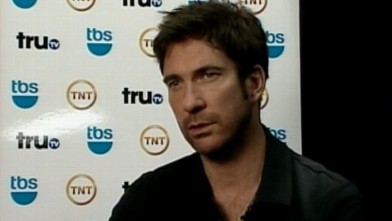 Dylan McDermott may finally have some closure. A reopened police investigation has concluded that the actor's mother, Diane McDermott, was shot and killed in 1967 by her now-dead gangster boyfriend.
Police in Waterbury, Conn., reopened the investigation into Diane McDermott's death in 2011 after Dylan McDermott contacted them with questions, according to the Republican-American newspaper. The actor, who was born in Waterbury, met a local mayor at a fundraiser last year and told him that he wanted to know what really happened to his mom.
"He said, 'in order for me to survive and to get where I am today, I needed to bury that moment in my life deep within myself,''" Gugliotti Mayor Neil M. O'Leary told the Associated Press. "He said, 'it wasn't until recently that I've come to the point in my life where I'm able to begin to process all of this and make it part of his life.'"
While Diane McDermott's death was made to look like an accident, police concluded that she was shot in the back of the head, and the weapon found by her body was not the one that was used to kill her.
The "American Horror Story" star declined to comment, but his sister told the Republican-American, "I'm happy to know my mother wasn't mentally ill or depressed. Somebody took her from us; she didn't leave us."
Click through for five more stars who have dealt with the heartbreak of their parents being murdered.