Facebook ‘Find Friends Nearby’ Lets You Find New Friends Around You 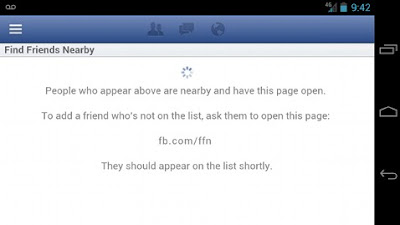 Facebook is thinking about all the ways you can find more friends, including the ones around you. The social network has quietly rolled out a new feature called Find Friends Nearby.
Find Friends Nearby, or Friendshake, as Facebook is calling it in some places, will display the names of people who are in your area with their phones. But you have to opt into using the service by visiting http//fb.com/ffn on your mobile phone. The site will prompt you to agree to share your location. If you choose to do that, it will return the names of people — friends and non-friends — in the area. It will only return the names of other people who have opted in to use the feature.
First reported by the tech site TechCrunch, the feature hasn’t officially been announced by Facebook. However, the Find Friends Nearby feature is live and working; we tested it at the ABC News headquarters and it returned the name of an individual in Manhattan.
The service comes just two months after Facebook acquired Glancee, a mobile app that allowed users to find friends near them with similar interests.
Facebook would not discuss the privacy issues surrounding the service or when it plans to talk about it more publicly. ”We are constantly testing new features but have nothing more to share at this time,” a Facebook spokesperson told ABC News. That said, you can now try the feature at http//fb.com/ffn or through the iOS and Android apps. Just be mindful that you are opting to tell strangers where you are.
Update: Facebook has pulled the feature and issued the following statement:
“This wasn’t a formal release – this was something that a few engineers were testing. With all tests, some get released as full products, others don’t. Nothing more to say on this for now – we’ll communicate to everyone when there is something to say.”