Venus Loses in Wimbledon 1st Round, 1st Since '97 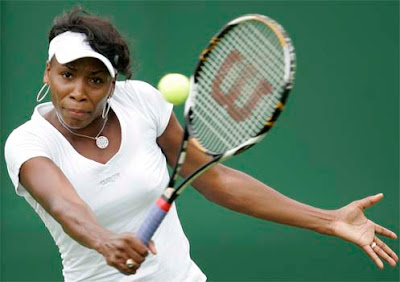 For the first time since her debut appearance at the All England Club 15 years ago, five-time Venus Williams failed to get past the first round of Wimbledon.
The seven-time Grand Slam champion was eliminated 6-1, 6-3 by Elena Vesnina of Russia at Wimbledon on Monday, the latest setback in her return to tennis after being diagnosed with an energy-sapping autoimmune disease.
Williams, who has fallen to 58th in the rankings, lost the first five games on Court 2 to the 79th-ranked Russian and, although she picked up her game and fought hard, was never able to turn the match around.
It was the first time Williams lost in the opening round of a Grand Slam since the 2006 Australian Open— the first at Wimbledon since her debut appearance in 1997.
"I feel like I'm a great player," Williams said. "I am a great player. Unfortunately I have to deal with circumstances that people don't have to deal with normally in a sport, but I can't be discouraged by that. I'm up for challenges. I have great tennis in me. I just need the opportunity."
There were no opening day troubles for top-ranked Novak Djokovic, six-time champion Roger Federer and No. 1 Maria Sharapova, who all enjoyed easy straight-set wins on a cloudy but dry start to the two-week grass court championships.
Defending champion Djokovic beat Juan Carlos Ferrero 6-3, 6-3, 6-1 in the day's first match on Centre Court, while Sharapova came on next and overpowered Anastasia Rodionova 6-2, 6-3.
Federer, seeking his record-tying seventh Wimbledon crown, dropped only three games in trouncing Spain's Albert Ramos 6-1, 6-1, 6-1 on Court 1 — the first time since 2003 that he wasn't assigned to Centre Court for the opening round.
The highest seeded player to fall on Day 1 was No. 6 Tomas Berdych, the 2010 runner-up from the Czech Republic who lost in three straight tiebreakers to 87th-ranked Ernests Gulbis of Latvia. Gulbis, considered a potential top-10 player who never lived up to his potential, had 30 aces to win 7-6 (5) 7-6 (4) 7-6 (4).
John Isner, the 11th-seded American, was upset in five sets by Alejandro Falla of Colombia, 6-4, 6-7 (7), 3-6, 7-6 (7), 7-5. Isner served 31 aces but was broken to end the match, a result that ruled out a second-round meeting between the American and Nicolas Mahut.
Isner beat the Frenchman in the longest match in tennis history here two years ago, an 11-hour, 5-minute marathon that ended 70-68 in the fifth set. Isner defeated Mahut again last year in the first round.
Kim Clijsters, a four-time Grand Slam winner playing in her final Wimbledon, beat former No. 1 Jelena Jankovic of Serbia 6-2, 6-4. The Belgian, who withdrew from the semifinals of a grass-court tournament in the Netherlands last week with a stomach muscle strain, showed no signs of injury as she extended her career record over Jankovic to 8-1.
Playing in her 16th straight Wimbledon, the 32-year-old Williams was unseeded for the first time since 1997. She was coming off a second-round loss at the French Open to Agnieszka Radwanska.
Williams revealed in late August at the U.S. Open that she had been diagnosed with Sjogren's syndrome, an autoimmune condition that can cause fatigue and joint pain. She skipped the Australian Open in January, before returning to the tour in March in a bid to earn a berth on the U.S Olympic team for the London Games.