Violence in Syria Worse Than Before Ceasefire 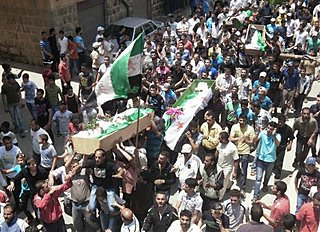 The violence in Syria has matched or exceeded levels from before the April ceasefire agreement, the United Nations said Wednesday, as it suggested that government troops could be behind the killing of more than 100 civilians in the village of Houla last month.
Reflecting the sense of urgency, senior diplomats said world powers would meet Saturday in an attempt to end the bloodshed, with U.S. Secretary of State Hillary Rodham Clinton and Russian Foreign Minister Sergey Lavrov being joined by other top diplomats from U.N. Security Council nations and possibly neighbors of Syria.
The U.N.'s deputy envoy for Syria, Jean-Marie Guehenno, told the U.N. Human Rights Council that the violence in Syria has "reached or even surpassed" levels seen before the April 12 ceasefire agreement and that a six-point peace plan forged by his boss, U.N.-Arab League envoy Kofi Annan, "is clearly not being implemented."
Meanwhile, a U.N. probe into the massacre in the central Syrian village of Houla concluded that forces loyal to the government "may have been responsible" for many of the deaths.
The report by U.N.-appointed human rights experts says the military or pro-government shabiha forces had better access to the Houla village during the May massacre. The village leans toward opposition support and most of the victims were women and children who were slaughtered in their homes, it said.
The head of the expert team, Brazilian professor and diplomat Paulo Sergio Pinheiro, told the U.N.'s top human rights body in Geneva that "the manner in which these killings took place resembles those previously and repeatedly documented to have been committed by the government" but that a final verdict on who was responsible for the massacre would require further investigation by his team.
Fayssal al-Hamwi, a Syrian ambassador in Geneva, charged that the allegations against the government are "quite fantastic."
The increasing militarization of both sides in the conflict has Syria lurching toward civil war. The failure of Annan's internationally brokered peace plan has made it more difficult for outside observers, humanitarian workers and supplies to get in, or reliable information to filter out.
Activists say more than 14,000 people have been killed since the uprising against President Bashar Assad's regime began in March last year.
U.N. officials said they were preparing to send out invitations and expected to make an announcement later Wednesday on the Saturday meeting. Guehenno, a former U.N. peacekeeping chief, said the Syrian government and rebel groups must be made to understand that there are "consequences" to failure to implement the six-point plan.
"But this effort cannot be open-ended. Time is running out. Syria is spiraling into deeper and more destructive violence," he said.
Russia and the United States have both said they want to help Annan. But Russia and China, two of the Security Council's five permanent members, have twice shielded Syria from U.N. sanctions.