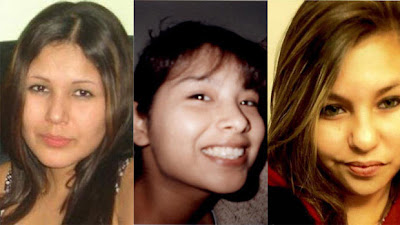 Winnipeg police have made an arrest in the deaths of three women reported missing within the last year.
Shawn Cameron Lamb, 52, has been charged with three counts of second-degree murder in connection with the deaths of Carolyn Sinclair, 25, Tanya Jane Nepinak, 31, and Lorna Blacksmith, 18.
Police Chief Keith McCaskill would not say where Lamb has been residing, but mentioned that Winnipeg police are in contact with other jurisdictions.
Police said Lamb is originally from Sarnia, Ont., but a family member who did not want to be identified confirmed to CBC News that he is from Barrie, Ont.
The suspected serial killer's criminal record includes convictions for robbery, carrying weapons, uttering threats, fraud, forgery, assaulting police officers, possessing stolen property, breaking and entering and breaching court orders.
He was recently arrested in connection with a June 21 sex assault.
"This individual was a person of interest and was on our radar, for sure," McCaskill said.
"Sometimes things like that happen, [they get] caught up in another type of offence and sometimes we get a break in a case, and that's what happened here."
Amanda Sinclair, the sister of Carolyn Sinclair, whose body was found in the spring, confirmed on Monday that police had made an arrest in relation to her sister's death.
Amanda Sinclair said she now wonders if there is a link between the homicides, as all three victims had lived at some point in Pukatawagan, a First Nations community in northwestern Manitoba.
"Did he randomly pick them or did he choose them himself … did he target these women?" Sinclair told CBC News.
Amanda Sinclair said police told her family that Lamb had confessed to killing her sister, but officers have revealed little publicly about their investigation.
Carolyn Sinclair went missing in December 2011. Sinclair's family told CBC News that she was five months pregnant at the time.
Police and family members said that Sinclair was battling a drug addiction and worked in the sex trade to support her habit.
Her body was found in a dumpster behind an apartment complex in the 700 block of Notre Dame Avenue, between Toronto and Victor streets.
Sinclair said she wants to know if her sister knew Lamb or if she had been picked up off the street.
Went for pizza
Police said that Lamb knew Nepinak, who was last seen on Sept. 13, when she told her mother she was going to a pizza restaurant a few blocks away from her Sherbrook Street home.
Blacksmith was last seen in January. Her body was discovered near a dumpster on Simcoe Street late last week.
Nepinak's body has never been found, but police say they believe she is dead.
Red Circle Alert, a social network group that tries to help locate missing native people, created a Facebook event in March to aid in the search for Carolyn Sinclair, Tanya Nepinak and Lorna Blacksmith.
The page notes that all three women are from the same reserve and went missing from the same area.
The Assembly of Manitoba Chiefs (AMC) held a news conference following the police announcement Monday.
Grand Chief Derek Nepinak said First Nations women are sacred and valued citizens of aboriginal communities and must not be treated as second-class citizens.
Manitoba Keewatinowi Okimakanak Grand Chief David Harper said that he is demanding a public inquiry into missing and murdered women in Manitoba.
The AMC will be holding a vigil for Sinclair, Nepinak and Blacksmith on Tuesday at the Manitoba legislature and said members will not leave until a public inquiry is called.
Police said they are looking into the possibility that there could be more victims.