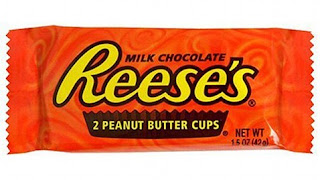 A Lorain, Ohio, Sunoco is having trouble with a “Reese Cup bandit.”
A repeat thief has stolen $400- to $600-worth of Reese’s Peanut Butter Cups from the Sunoco in the past several months, according to Lorain Police.
He returned to the Oberlin Avenue store at 1 a.m. Tuesday and stole an unknown amount of Reese’s Peanut Butter Cups and a bag of chips.
The clerk working at the Sunoco Tuesday blocked the door but the thief pushed his way past him, police said. The clerk was not injured. Employees of the Sunoco have nicknamed the thief the “Reese Cup bandit.”
“He comes in and out before they can call the police,” Sgt. Mark Carpentiere of the Lorain Police told ABCNews.com.
A Sunoco store employee declined to comment to ABCNews.com.
Employees told Lorain police that theft is a constant problem at the Sunoco after midnight. There is a security camera in the store but police have not yet obtained it, Carpentiere said.
The suspect is described as a black male, approximately 18 years old, 5-foot-10 and 140 pounds, police said.
He came into the Sunoco dressed in all black with a hoodie pulled over his head.