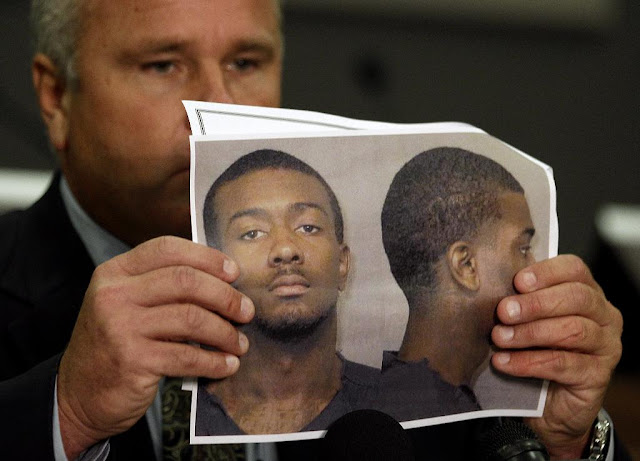 Authorities searching for a man charged with fatally shooting three people near Auburn University swarmed a house Monday where they believe he's hiding, firing tear gas and sending a tactical team on cautious forays inside.The tactical team had searched the lower portions of the house and was making deliberate moves into the attic where suspect Desmonte Leonard was believed to be hiding, said Montgomery Public Safety Director Chris Murphy. He declined to give a timetable for them to bring someone out.
"We are having to slowly put our people up there and do an inch-by-inch search," he said during a briefing several hours after police surrounded the house.Police had hoped to flush out the person with tear gas and verbal commands, but sent in the tactical team after getting no response. They've used thermal imaging and other technology to narrow down what part of the attic he's in. The attic is cramped, complicating investigators' efforts."This is a pretty driven person. He's got nothing to lose," Murphy said. "You cannot rush it."Murphy says investigators believe he's likely covered in insulation and suffering effects from the tear gas.
"He's got to be in a lot of pain," he said.Manhunt for suspect in Auburn U. shooting.Dozens of police cruisers, trucks, fire vehicles and vans surrounded the house, located in a middle-class area a few miles from Alabama's Capitol.
Authorities received two 911 calls that someone who looked like suspect Leonard was in or near the house, Montgomery Mayor Todd Strange told reporters. One of the calls came from the owner of the home.
Police spokeswoman Regina Duckett said it appeared only one person was in the home. Authorities were able to hear coughing and movement in the house after the tear gas was used."I'm actually surprised he's still in there," she said.Officers said they assumed Leonard is armed.Authorities said Leonard was charged with three counts of capital murder in the shooting Saturday night during a pool party at University Heights apartments. He's also accused of wounding three others.The dead included two former Auburn football players.Earlier in the day police said they had arrested two men accused of hindering the search.
Auburn police said Jeremy S. Thomas, 18, of Montgomery was charged with hindering prosecution after he fled the scene of the shooting with Leonard. Records show Thomas was free on bond at the time of the Auburn shootings while awaiting a manslaughter trial set to begin June 18 in last year's shooting death of a teenager.Montgomery police said Gabriel Thomas, 41, was also charged with hindering prosecution after having contact with Leonard after the shooting and providing false information to officers.
Police said it wasn't known whether Jeremy Thomas and Gabriel Thomas are related. Officers also were looking for a third man described as a person of interest in the case, but it wasn't clear why.
The dead included former Auburn players Edward Christian, who had to quit the team because of a lingering back injury; and Ladarious Phillips, who was transferring from Auburn to Jacksonville State University to play football. The other person killed was Demario Pitts, 20.
Of the three people who were wounded, current Auburn football player Eric Mack and Xavier Moss were both treated and released from a hospital. The third, John Robertson, remained in critical condition after being shot in the head.A witness who identified himself as a friend of Pitts said he didn't know the man who pulled out a gun and began firing into the crowd following a dispute over a woman."I ain't never seen him a day of my life," said Turquorius Vines, 23, who wasn't injured in the melee.Police arrested Leonard on two previous charges involving guns.Court records show Montgomery police arrested Leonard in 2008 on a charge of carrying a pistol without a license, after stopping a suspected stolen vehicle and finding him inside. Documents available online didn't show whether the case was ever resolved, but Leonard was freed on bond within days.Leonard was charged in 2009 with assault after a man was shot in the groin, but prosecutors dropped the case after the victim told authorities Leonard wasn't the shooter.A Montgomery woman filed a paternity suit against Leonard on Friday that identified him as the father of a girl who turned 1 last month.
Another woman sued him in 2009 seeking unpaid child support for a girl who is now 4. A court ordered monthly payments of $305 by Leonard, who records show was working at a Walmart store at the time.
Auburn police said the shootings did not appear to have anything to do with some of the victims being former or current players on the football team, which won the national championship in 2010. The swimming pool at the apartment complex frequently is the site of parties.