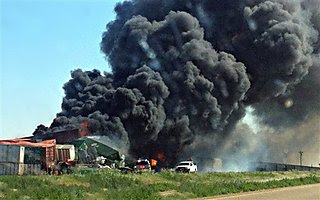 Three Union Pacific Railroad crewmembers were missing after two freight trains collided Sunday in the Oklahoma Panhandle, authorities said.
An eastbound train carrying vehicles and a westbound train crashed about 10:08 a.m. Sunday near Goodwell, Union Pacific spokeswoman Raquel Espinoza said. A two-person crew was aboard each train, and officials were unable to account for two engineers and a conductor, Espinoza said.
The other conductor appeared to be uninjured, and officials were interviewing him about what happened, she said.
"He's shaken up about the situation, and we are working to make sure that he receives any care that he needs. We're doing everything we can to find the rest of the crew," Espinoza said.
Law officers were searching areas near the tracks to determine if the missing crewmembers had escaped injury, Oklahoma Highway Patrol trooper Betsy Randolph said.
"We're hoping they may have jumped off the train," Randolph said.
Two locomotives on the 80-car westbound train and a locomotive from the 108-car eastbound train caught fire after the collision, Espinoza said. One train was hauling a resin solution, but Espinoza said that load wasn't on fire and was doused with water as a precaution.
Firefighters had the blaze contained by Sunday night, but it continued to burn, Randolph said.
"Once the fire is out then we will have to wait until the wreckage cools — it's all metal — before emergency personnel can get in there," she said.
At least one firefighter was taken to a hospital for treatment of a heat-related injury after temperatures climbed past 100 degrees in the area, Randolph said. Other firefighters were treated for similar ailments at the scene.
A National Transportation Safety Board team was en route to the scene Sunday night. A spokesman didn't immediately return a message seeking comment.