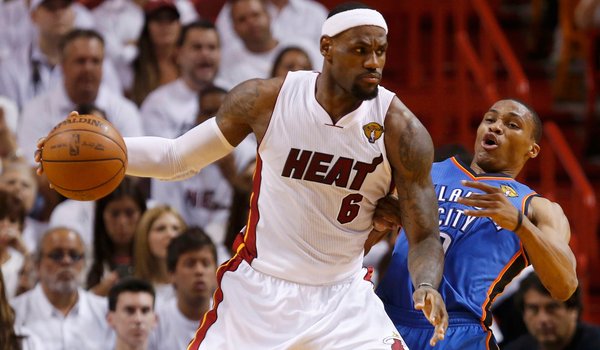 MIAMI — Nearly every detail in the portrait looks the same now as it did then: in the foreground, a microphone wrapped in a red-white-blue N.B.A. logo; in the background, a bright blue banner reading, “The Finals.” In between, LeBron James.
The podium appears to have hardly moved in the 373 days since James sat there in defeat, sullen and spiteful after a six-game loss to the Dallas Mavericks. His detractors could enjoy their moment, James said, but they would “have to wake up tomorrow and have the same life that they had before they woke up today.”
That LeBron James walked off the stage and into a long off-season of anguish, reflection and self-help exercises, both mental and physical.
The LeBron James who slid into that podium chair Wednesday afternoon — one victory from a championship, perhaps 33 hours from ultimate, joyful vindication — projected neither tension nor satisfaction. Just a Zen calm.
He talked breezily about his pregame reading routine, his summer tutoring sessions with Hakeem Olajuwon and this celebrated showdown with Kevin Durant that seems close to a conclusion. He made jokes about his Game 4 leg cramps.
The world demanded an evolution, in James’s game and his character. In these finals, he has shown both, leading the Miami Heat to a 3-1 lead over the Oklahoma City Thunder. James has scored with ease (29.3 points per game) and efficiency (shooting .472 from the field), and at all the right times, guiding the Heat through a series of tight fourth quarters.
He has been assertive, dominant, unbowed by the moment, unfailingly cool under that still-searing spotlight.
“He just seems more at ease,” said Chris Mullin, the ESPN analyst and Hall of Famer. “This moment, the finals itself, I think all that stuff doesn’t bother him anymore. What else can he hear? How much more nit-picking could a three-time M.V.P. take?”
As he sat on the precipice of history, stroking his beard and reflecting on the journey that brought him here, James considered that dark moment on the podium last June.
“I was very frustrated,” he said. “I was very hurt that I let my teammates down, and I was very immature. Like I said, last year, I played to prove people wrong instead of just playing my game, instead of just going out and having fun and playing a game that I grew up loving, and why I fell in love with the game. So I was very immature last year after Game 6, towards you guys and towards everyone that was watching.”
So much has changed for James since then. He moved his family to Miami, became engaged to his longtime girlfriend, Savannah Brinson, and rededicated himself to his sport. Criticized in the past for lacking a midrange game, James worked with Olajuwon on post moves and spent the season honing them.
The payoff came in the postseason, and especially in these finals. Where a year ago James drifted, now he attacks. Where he once settled for lazy fadeaway jumpers, he now grinds through traffic for layups and runners, or sets up on the block and beats double teams with his passing.
In last year’s finals, James averaged 17.8 points, 6.8 assists and 7.2 rebounds. Of his 90 field-goal attempts, 57 percent came from 10 feet or deeper. In these finals, James has moved inside, taking 60.6 percent of his shots within 9 feet of the basket.
Once viewed as a 21st century Magic Johnson, James is defying one-dimensional comparisons. He is passing like Magic, soaring like Michael Jordan and pounding defenses like a power forward.
“Last night, you see LeBron dominating the paint like Barkley and Malone,” Mullin said, referring to Charles Barkley and Karl Malone. “But then you see him in the post, when the double team comes, he’s throwing out of it like Magic or Bird. Nice, simple play. Then you see him scoring like Michael, so you get that crazy package in one guy.”
James has scored at least 25 points in all but two playoff games, joining Jordan (1992) and Olajuwon (1995) as the only players to hit that mark in at least 20 games in a single postseason.
On Tuesday night, James had his “Jordan flu” moment. After being carried from the court because of painful leg cramps in the fourth quarter, he returned and hit the 3-pointer that put the Heat ahead for good.
Moments like that shape a legacy, and James has been modifying his all spring. When he made his first finals appearance with the Cleveland Cavaliers in 2007, James was heralded as a pass-first superstar. At some point, selflessness became more of a fault than a virtue. The Cavaliers were swept, 4-0, by the San Antonio Spurs.
By the time James flamed out against the Boston Celtics in the 2010 playoffs, it was his mental state that had become reason for suspicion. When he finally returned to the finals with the Heat last June, James seemed overwhelmed by the moment and by the expectations he himself created with his promise of multiple titles.
This time James shows no such frailty. Before games, he calms his mind with a good book. Once tipoff arrives, he does not distract himself with silly poses or sideline dances, or gestures to the crowd, as he did in Cleveland.
“He’s a little bit more focused than I ever seen him,” said the Thunder’s Kendrick Perkins, who as a former Celtic has seen James a lot.
“You can just see it in his eyes,” Perkins said, adding, “You can just tell, he really want to win. Like he don’t care how it get done.”