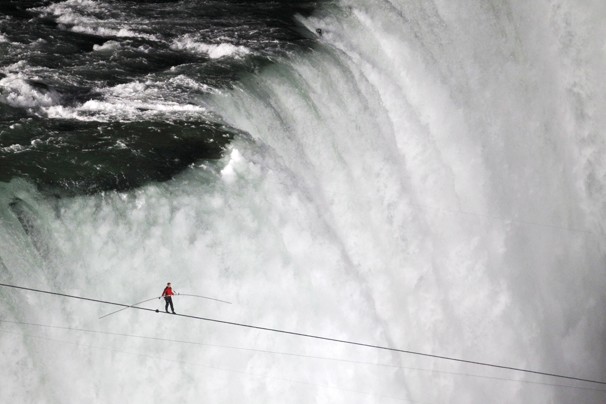 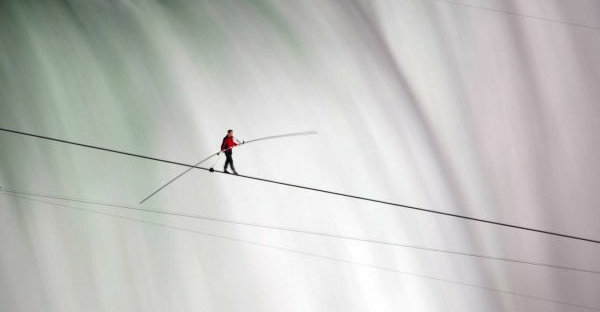 He took the ultimate walk of fame Friday night when he became the first person to cross Niagara Falls on a high wire. And although Nik Wallenda's 1,800-foot trip over the roaring waters of Horseshoe Falls, the largest of the three falls, secured him some serious bragging rights, the daredevil seemed more interested in the estimated 112,000 people who gathered to witness the spectacle (and the millions more who tuned in on TV)."I hope what I do and what I just did inspires people around the world to reach for the skies," Wallenda, 33, told reporters after the walk, in which he wore a safety tether as per the request of ABC, which helped sponsor the stunt, according to the Associated Press. He said he felt like he was "on cloud nine" after braving "wind coming from every which way" and blinding mist on his 30-minute walk from the U.S. into Canada."There was no way to focus on the movement of the cable," he said. "If I looked down at the cable, there was water moving everywhere. And if I looked up, there was heavy mist blowing in front of my face. So it was a very unique, a weird sensation."So how did he overcome the forces of nature to complete the historical walk, which paid homage to his circus family, the Flying Wallendas, and his great-grandfather, the late Karl Wallenda (who died during a stunt in Puerto Rico)?