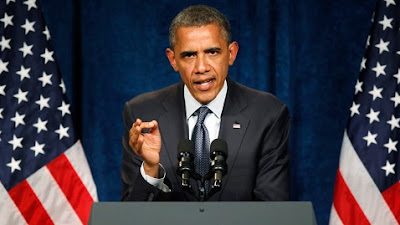 President Obama said today that Republicans are "playing chicken" with a low-interest student loan program, and urged college students to pressure the GOP in advance of a July 1 deadline.
"We cannot afford to price the middle class, and folks who aspire to go into the middle class ... out of the college education market," Obama told a group of students gathered at the White House.
The low-interest loan program enacted by a Democratic Congress five years ago expires July 1. Without renewal, loan costs for some students will be double, Obama said.
The president, who has discussed this issue for months, said it's "mind boggling" that things have gotten to this point. He said Republicans are pushing the item to the limit, just as they have on the debt ceiling and other budget issues in recent years.
"This issue didn't come out of nowhere," Obama said. "It's been looming for months, but we've been stuck watching Congress play chicken with another deadline."
Obama urged students to use social media to promote the issue, including tweets with the hashtag "don't double my rate."
Congressional Republicans said they are willing to extend the program, but the White House is refusing to negotiate on offsetting budget cuts.
They accused the president of playing games in order to appeal to the youth vote.
"The president doesn't have a positive message to send any of these folks, so he's cooking up false controversies to distract them from his own failure to turn the economy around," said Senate Minority Leader Mitch McConnell, R-Ky.