U.S. Olympic Berth Could Be Decided by Coin Toss After Photo Finish 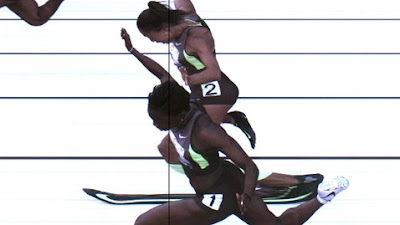 After thousands of photographs taken within a second could not determine who placed third in a race for a spot on the U.S. Olympic track and field team, the tie may be broken by a coin toss.
Allyson Felix and Jenebah Tarmoh finished in a dead heat in Saturday’s 100-meter race, and only one of them could be granted a berth on the team in this summer’s London Games. The tie caught USA Track and Field officials off-guard, and for most of Sunday, the outcome was anyone’s guess.
But Sunday night, USA Track and Field spokeswoman Jill Geer outlined a detailed procedure  that gave Felix and Tarmoh a choice: They could either sprint in a one-on-one runoff or a flip a coin.
The runners will not decide until after they compete in the 200-meter, their coach, Bob Kersee, said. The preliminaries for the 200 begin Thursday, and the final is on Saturday.
Initially, the track timer ruled that Felix, who has won three Olympic medals, had lost by a thousandth of a second. But officials revised the results shortly afterward, and while a tie-breaking procedure existed for preliminary events, no rule could be found for a race for an Olympic berth.
Kersee said the two athletes, whose strict regimens would make an extra race burdensome, need to focus on the upcoming 200, according to Reuters.
Track officials “need to leave my athletes alone, and let me coach them in the 200, then make a decision,” Kersee told Reuters early Sunday, adding that he would take no part in determining who would earn the spot on the team. “It would be like, ‘Which kid do you love the most?’”
USA Track and Field’s nearly 800-word document announcing the tie-breaking procedure stipulates that in the event of a coin toss, the coin must be a quarter with George Washington on one side and an eagle on the other. The athlete with the highest world ranking, Felix, will call heads or tails.
The final roster for the U.S. Olympic track team will be decided before the trials end Sunday, Geer said.