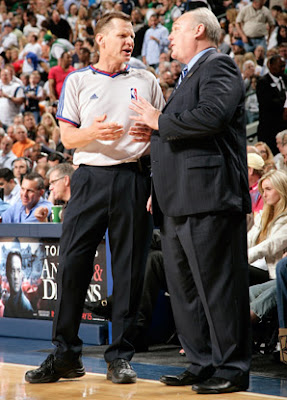 Television viewers have long relied on broadcasters to provide analysis and explanations about the often-questionable decisions made by NBA referees.Steve Javie hopes to change that.
The longtime NBA official, who retired before the start of this season due to an arthritic right knee after 25 years in the league, has been hired by ESPN as a rules analyst for pregame and postgame coverage of the NBA Finals, as well as SportsCenter. Javie hopes to follow in the footsteps of Mike Pereira, the former NFL vice president of officiating who has been sensational for Fox Sports in helping viewers understand the NFL's byzantine rule book.
In an interview with SI.com on Sunday, Javie said Pereira's success inspired him to pitch ESPN on a similar position months ago. Last week, Jason Romano, one of ESPN's talent producers, reached out to Javie to do a segment on SportsCenter on the officiating of the Heat-Celtics series. Network officials, including Mark Gross, the ESPN senior vice president who oversees the network's NBA coverage, were pleased with what they saw and invited him to work the NBA Finals."Mike and I are friends and I think what he's done has been fantastic," Javie said. "He's been the trailblazer here and he told me he thought the NBA, ESPN or TNT would be interested in something like this. I think Mike has really gained credibility for officials in the NFL, but fans of the NBA have never heard from or been given the perspective from the officials' point of view. I'm hoping for positive feedback because I believe it's something that's been missing. I hope people come away and say, "Boy, I didn't even look at it that way, and I never knew that."
Asked whether he could criticize his former NBA colleagues, Javie offered a nuanced take. "One thing officials do all time is critique each other as a crew when we are watching film after a game," he said. "You have to be open, honest and objective. The first thing I tell young referees is if you are not objective enough to admit your mistakes, you are not growing in the profession. The key is why did I blow the whistle or not blow the whistle, and I think I'll be able to offer that perspective. I can probably show you the reason nine times out of 10 why an official missed the play, whether it was because of the angle or the positioning they were in. People need to know how they could miss something.
"Now I'm not going to be a jerk about it because these are my guys. But I want to be the voice of the official and tell people, 'Look at this play. Maybe you should have had a whistle here, but here is the reason why they didn't blow it.' I won't be a guy who blasts the officials but at the same time I will be someone who points out to fans that the ref did not get a call right and here's why. It's not necessarily a criticism but an explanation on why a call was missed."
For years Javie ranked as one of the league's highest-rated referees, with a reputation for talking things out with players as well as being quick to deliver a technical when needed. Among his highlights were calling Michael Jordan's final game in 2003 and ejecting both a mascot (Hoops, of Washington Bullets fame, in 1991) and a broadcaster (Trail Blazers analyst Mike Rice in 1994, for disputing his calls).
Last year Javie called Games 1 and 6 of the NBA Finals between the Heat and Mavericks, one of 18 Finals he has worked over his career. What kind of challenge do star players such as Kevin Durant or LeBron James present for referees?
"I believe when you have great players, they make the game easier to officiate," Javie said. "They do great things and people are astonished by it. But as an official, in my experience, when you get to the Finals, you have the best players, the best teams -- and with someone like Durant and LeBron, their play is elevated and I think it makes it easier for officials. Does that mean there won't be difficult plays? No. But the better the player they are, the easier the game is to officiate in my experience."
Javie was told during his interview with SI.com about a joke making its way through the sports blogosphere about Thunder center Kendrick Perkins receiving a technical from the refs before the start of the series. "That's a pretty good line," Javie said, laughing. "Kendrick Perkins is a very intense player as we all know. I don't know him personally, but he seems to be a nice guy who lets his emotions get a hold of him at times. But in the playoffs, a lot of times the players keep their emotions more in check because they know one point can mean the game. I think in the Finals, you'll see the players make a concerted effort to be under control."