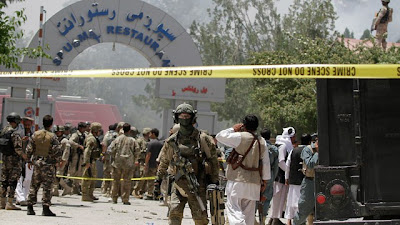 Heavily armed Taliban insurgents stormed a popular lakeside hotel just outside of Kabul, killing at least 18 people and wounding several more in a brazen overnight attack.
The assault, which lasted nearly 12 hours, began shortly before midnight on Thursday. As many as eight insurgents, some reportedly disguised in burqahs, killed the security guards at the hotel, stormed inside, and began firing at guests.
The dining hall was packed with civilians, including women and children. The victims included the hotel manager, several private security guards, and at least one police officer.
The Spozhmai Hotel, on Lake Qarghah, is a short drive outside of Kabul and is popular among Afghan officials and dignitaries looking to escape the blistering Kabul heat.
Once inside, insurgents battled security forces, then later Afghan police, with loud explosions and smoke emanating from the site throughout the night. Journalists on the scene described having to shelter behind a small concrete barrier with gunshots whizzing overhead to escape being caught in the crossfire.
Some guests escaped by jumping out of second story windows and crouching in the lake to avoid detection. Dozens of others were taken hostage by the insurgents before being released. Witnesses describe seeing ambulances loaded with bloodied and wounded bodies being rushed to hospitals in Kabul. NATO helicopters circled overhead well into the night remained in place until the early afternoon.
Afghan commandos eventually raided the compound, killing the gunmen and releasing the remaining hostages.
The Taliban quickly claimed responsibility. In a statement posted to their website, the group said insurgents targeted the hotel because it was a "hub of obscenity and vulgarity frequented by the lusty foreign and local top-level military and officials." Other Taliban statements say the hotel was attacked because it was serving alcohol, something the Taliban fiercely oppose, and that its female staff members were subject to mistreatment.
Minister of Interior spokesman Sediq Sediqi said the Taliban's statement was a lie.
"I can assure you there were no government employees as they claim or that alcohol was being served. All these claims are baseless. Most of those claims by Taliban are just to cover their cowardly act. This is clear to all people of Afghanistan that Qargha is a picnic spot for families," Sediqi said.
He added, "The last few days our security forces put in place a great security plan so they couldn't get close to any government place that's why they targeted a public spot."
Afghan General Ayub Salangi deplored the attack on unarmed civilians. "They aren't able to face Afghan forces so they target public places and try to create a panic... There were no government officials there except for one police guard. All of the victims were ordinary civilians."
Gen. John Allen, head of the international forces, said the assault had the earmarks of the Haqqani network, "which continues to target and kill innocent Afghans."
Allen said the response of the Afghan forces left "little doubt about their ability and capability to protect the Afghan people in the years ahead."
Afghan President Hamid Karzai condemned the attack, which comes just one day after he warned Afghans in a nationally televised speech that insurgent attacks were on the rise.
This attack marks the end to a particularly violent week in the country. On Wednesday, a suicide bomber on a motorcycle attacked a checkpoint in a busy market, killing 21 people, including three U.S. soldiers. A day earlier, militants stormed a NATO base and attacked a police checkpoint in the country's south, wounding several U.S. troops. And on Monday, three gunmen in Afghan police uniforms opened fire on coalition forces in Kandahar, killing one U.S. service member and wounding nine others.