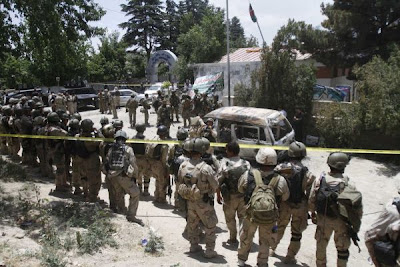 Heavily armed Taliban insurgents stormed into a lakeside hotel north of Kabul and opened fire on guests inside, killing 18 people — most civilians — before the 12-hour long rampage ended Friday morning, Afghan officials said.
The brazen attack on a resort where many Afghans go to try to forget about the war was a dramatic reminder of the Taliban's resiliency as insurgents push hard with their summer offensive in a show of strength as U.S.-led forces prepared to withdraw by the end of 2014.
Insurgents first killed the security guards at the hotel, then pushed their way inside and began firing at guests who were having a late-night meal. Some of the guests escaped while others were held hostage as the attackers battled Afghan security forces who rushed to the scene for the next 12 hours.
Kabul police said five attackers had been shot and killed by midday Friday, ending the standoff. The Taliban claimed only four of their fighters were involved in the attack on the Spozhmai hotel at Qargha Lake, a popular weekend retreat about a half-hour drive from the capital.
U.S. Gen. John R. Allen, the commander of U.S. and NATO forces in Afghanistan, said the attack was likely carried out by fighters loyal to the Haqqani network. The al-Qaida linked group is based in Pakistan and regularly targets Afghan and coalition forces in Afghanistan, and conducts deadly attacks in Kabul.
"This attack bears the signature of the Haqqani network, which continues to target and kill innocent Afghans and blatantly violate Afghan sovereignty from the safety of Pakistan," Allen said, adding that some victims were killed in their sleep.
He added that the coalition provided "minimal support" at the Afghans' request.
Mohammad Zahir, criminal director for Kabul police, said the hotel was crowded when the attackers entered and opened fire on families having a late dinner.
"Some of the guests jumped from the window into the hotel yard. They were hiding under trees or any safe place they could find," he said. "Three of the guests jumped into the lake and hid in the water."
Kabul Police Chief Mohammad Ayub Salangi said the attackers — armed with machines guns, rocket-propelled grenades and vests laden with explosives — stormed the Spozhmai hotel at Qargha Lake before midnight on Thursday. By midmorning Friday, militants were still fighting Afghan forces, supported by international troops, and gunfire pierced the quiet surroundings of the lake area. Black smoke rose from the two-story hotel surrounded by trees as NATO helicopters circled overhead.
Mohammad Qasim, who survived the attack, said he went to the reception desk to tell the manager that he suspected that militants had entered the hotel.
"Before I finished talking with the manager, they fired on us," Qasim said. "(The manager) hid himself behind his desk, but around three to four other guys who were guards and waiters were killed by the attackers."
Afghan President Hamid Karzai condemned the assault, the latest in a string of attacks this week.
Fourteen Afghan civilians, three security guards and an Afghan police officer died in the attack, said Mohammad Zahir, criminal director for Kabul police.
Taliban spokesman Zabiullah Mujahid said the Taliban attacked the hotel because foreigners there were drinking alcohol and participating in other activities banned by Islam, but that was disputed by the Kabul police.