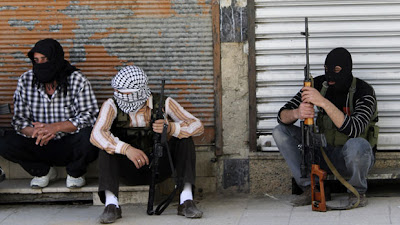 The Canadian military is drawing up contingency plans in case the Harper government chooses to join any international intervention in the Syrian crisis.
Defence sources say the work recently got underway when it became evident that UN-led peace efforts were unravelling and that unarmed observers have suspended patrols amid escalating violence.
The sources emphasized the effort is a normal part of military planning, is not the result of government direction, and is intended to give cabinet "a range of options depending on the international circumstances."
A broad set of scenarios are under consideration, one high-ranking official at National Defence told The Canadian Press.
Another source said the different commands have not yet been asked to identify units for inclusion in any mission.
A complicating factor is the speed with which events are unfolding, notably the deployment of two Russian amphibious assault ships and 1,000 Russian marines to protect the country's naval base in the Syrian port of Tartus, and a proposal by the Red Cross to evacuate wounded people from the embattled city of Homs.
A spokesman for Defence Minister Peter MacKay said late Wednesday talk of a military assistance mission is premature.
"As always, the Canadian Forces stand ready to assist both at home and abroad, if and when called upon," Jay Paxton said in an email note.
"Canada continues to explore all diplomatic means available to support the people of Syria."
France has called for a UN-enforced no-fly zone, and retired major-general Lew MacKenzie said participating is almost certainly one of the options Ottawa would consider.
But he cautioned Canada should support only a traditional no-fly zone and not a mission similar to that in Libya, which saw NATO warplanes stretch the UN mandate to help oust Moammar Gadhafi with attacks on command centres, missile batteries and armoured vehicles.
"That would [be] unfortunate because that's what pissed off the Chinese and the Russians, which partially got us into this current situation," said MacKenzie.
Both major powers felt NATO went beyond its mandate in Libya.
Beijing and Moscow have repeatedly blocked UN attempts to deal with the Syrian crisis, including the use of their veto over a UN Security Council resolution that called on Syrian President Bashar Assad to give up power.
Arab League wants peacekeeping force
Laurent Fabius, the French foreign minister, said Syria is in a civil war and he hoped Russia would set aside its reservations and agree to invoke the UN's Chapter 7. That allows the Security Council to take military action to restore the peace.
The French want to use a no-fly zone as the first stage to get humanitarian aid into the country, according to published reports.
MacKenzie said that is a possibility "providing the situation would permit that to even start," but the government needs to ask whether that scenario would require low-level air cover.
The secretary general of the Arab League called on Monday for the international community to deploy a peacekeeping force, which observers have suggested could lead to the establishment of safe havens, similar to the UN-mandated zones set up during the Balkan wars of the 1990s.
"If they established safe havens tomorrow, half the world would sigh a sigh of relief and say, 'Oh, my God. Good. We've done that. We've done something,"' said MacKenzie, who commanded peacekeepers during the siege of Sarajavo.
"It would take it off the front page, but the problem is the government and the rebels carry on with their confrontation."
MacKenzie said the government should resist the call to put troops on the ground, including special forces.
"I think they would be very dumb to get involved in a situation like that because it's not going to receive UN authorization, so therefore we'd have to be led by someone, whether it's France, the Brits or the Americans or whatever," he said.
"I don't foresee any circumstance in Syria, no matter how serious it gets, where Canadian boots will be on the ground."