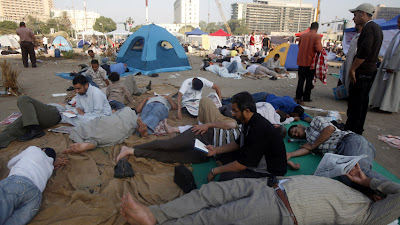 Egyptian protesters have occupied Cairo's Tahrir Square for the first time in months as they press for the release of the country's presidential election results.
People filled the square, at the heart of the uprising that led to the toppling of former president Hosni Mubarak, after the country's military rulers said the release of the weekend's balloting, which had originally been set for Thursday, was postponed.
In downtown Cairo, the newspaper headlines told the story of a country wound up tight, CBC's Derek Stoffel reported.
"Egyptians are about to explode," declared one of the papers.
All night long, demonstrators chanted in Tahrir Square, railing that the ruling military council has brought back martial law and that the generals have given themselves sweeping new powers.
The delay in the presidential voting results added to the protesters' concerns.
"This means there is an intention to rig the election," said demonstrator Sherif Mohamed. "There is an intention to betray the elected president."
The elections commission says it needs a few more days to investigate several hundred claims of voting irregularities raised by the two candidates in the race.
The two men — the Muslim Brotherhood's candidate, Mohamed Morsi, and Ahmed Shafiq, a former minister in Mubarak's cabinet — have both claimed victory.
Also Thursday, Human Rights Watch said the moves by Egypt's military rulers suggested a "meaningful" handover of power to civilian rule by July 1 would not happen as promised.
"The generals' relentless expansion of their authority to detain and try civilians now goes far beyond their powers under Hosni Mubarak," the group's Middle East director, Joe Stork, said in a written statement.