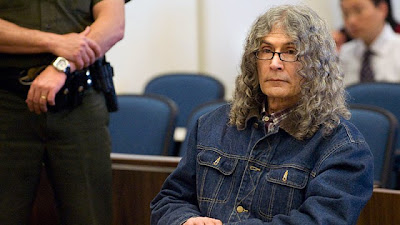 A convicted California serial killer pleaded not guilty Thursday to murdering two women in New York City in the 1970s, charges lodged just last year after suspicion swirled around him for decades.
Rodney Alcala, a former dating-show contestant who has spent the last 33 years tangling with authorities in a series of trials and overturned convictions, was arraigned Thursday in the deaths of Cornelia Crilley and Ellen Hover.
Hands and feet shackled, Alcala looked thin and drawn as he said only "not guilty" in a steady voice. He wore an orange jail jumpsuit and long gray hair in ponytail.
He was ordered held without bail and is due back in court Oct. 30.
A former photographer with an IQ said to top 160, Alcala was convicted in 2010 of killing four women and a 12-year-old girl in Southern California in the 1970s. He represented himself, offering a defense that involved showing a clip of his 1978 appearance on "The Dating Game" and playing Arlo Guthrie's classic 1967 song "Alice's Restaurant."
While appealing his death sentence in California, Alcala was indicted last year in New York, partly on evidence that emerged during his California trial, prosecutors said. He was brought to New York on Wednesday on a U.S. Marshals Service plane unsuccessfully fighting his extradition to New York.
Crilley was found strangled with a stocking in her Manhattan apartment in 1971. Hover, a comedy writer and former Hollywood nightclub owner's daughter who had a degree in biology and was seeking a job as a researcher, was living in Manhattan when she vanished in 1977. Her remains were found the next year in the woods on a suburban estate. Both women were 23.
Alcala had been eyed in Hover's death for decades and in Crilley's killing for at least several years. New York Police Department detectives investigating her killing went to California in 2003 with a warrant to interview Alcala and get a dental impression from him.
A forensic dentist later found that a bite mark on Crilley's body was consistent with Alcala's impression, a law enforcement official has said. The official was not authorized to speak publicly and spoke to The Associated Press on condition of anonymity.
The Manhattan district attorney's cold-case unit also conducted new interviews with more than 100 witnesses.
"After more than three decades, the defendant will finally face the justice system in New York for the murder of two victims," District Attorney Cyrus Vance Jr. said. "Today's arraignment brings us a step closer to obtaining justice for Ms. Crilley and Ms. Hover."
Alcala has been behind bars since his 1979 arrest in one of the California killings. Before that arrest, he also served a prison sentence on convictions of furnishing marijuana to a minor and kidnapping and trying to kill an 8-year-old girl.
After his 2010 conviction, California authorities released more than 100 photos, found in his storage locker, of young women and girls. They said they were exploring whether Alcala could be tied to cases in New York and other states.