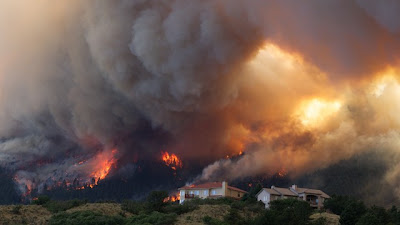 Rows and rows of homes have been wiped out by the Waldo Canyon fire that continues to blanket the mountain town of Colorado Springs with thick smoke, officials said today.
"We now know hundreds of homes have been destroyed," Mayor Steve Bach said today. "We are working through the process, which is very painstaking, of assessing every address to make sure that we have absolutely accurate information on each address."
More than 1,000 firefighters are now battling the blaze, which has reportedly burned 18,500 acres. It remains at 5 percent contained, but fire officials said they expected that to increase today.
"Today is the first day in five or so days that we haven't had a red flag warning," U.S. Forest Service spokeswoman Jerri Marr told ABC News affiliate 7 News in Denver.
More than half of the U.S. fleet of C-130s has also dumped retardant on the area.
An image taken by The Associated Press showed an entire neighborhood wiped out by the fires Wednesday. Officials said that more than 20,000 homes and 160 commercial buildings are still threatened.
Although there were no reports of injuries or deaths, 40 people were hospitalized for smoke inhalation. Colorado Springs doctors said the air quality was at least 10 times worse than normal.
Jason Hopper escaped with his wife and four children.
"I walked outside and flames were down the side of the mountain," he told ABC News.
"It's a lot to take in," said his wife, Kathleen Hopper.
Emily Franklin, 18, who just became a firefighter, watched her childhood tricycle and her first car go up in flames as she fought her first blaze.
"This is my first fire and it was my own home," she told ABC News. "Great way to kick off a career."
Her family is now one of 600 in Colorado desperately trying to figure out what to do next.
On Wednesday, severe heat and strong winds had firefighters bracing for worsening fire conditions, but today Incident Commander Rich Harvey said that his team had been able to control the "majority" of the fire despite the weather.
More than 32,000 residents have been evacuated from the fast moving blaze that started Saturday. Many had just minutes to grab what they could and get out.
The FBI says it is investigating whether the wildfires in Colorado Springs resulted from criminal activity.