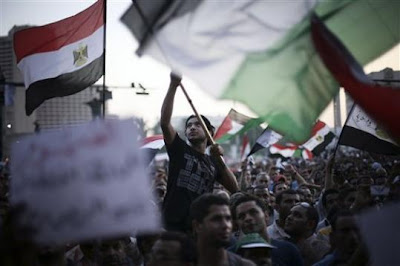 The Muslim Brotherhood's candidate for president has urged Egyptian authorities to release the results of the weekend's election as soon as possible, warning against manipulating the "popular will."
Mohammed Morsi said Friday a front is forming against a series of moves by the military council that threaten to curtail the powers of the next president. He appeared at a news conference alongside a group of public figures and youth representatives, adding pressure on the ruling generals.
The Brotherhood declared Morsi the winner in a runoff election for president just hours after polls closed this Sunday. That claim was contested by Morsi's rival, Ahmed Shafiq, ousted President Hosni Mubarak's last prime minister.
THIS IS A BREAKING NEWS UPDATE. Check back soon for further information. AP's earlier story is below.
Egypt's ruling military council on Friday blamed the Muslim Brotherhood for raising tensions by releasing presidential election results early — and defended decisions granting itself sweeping powers.
The military statement came as tens of thousands rallied in Cairo's Tahrir Square to support the Brotherhood's candidate for president, Mohammed Morsi. The protesters also denounced what they perceive as the military's power grab that strips the next leader of much of his authority.
The demonstration in midday heat Friday, the largest in four straight days of protests, showed the potential explosiveness of the situation in Egypt.
The Brotherhood declared Morsi the winner in a runoff election for president just hours after polls closed this Sunday. That claim was contested by Morsi's rival, Ahmed Shafiq, who was ousted President Hosni Mubarak' s last prime minister.
The military council said in a sternly worded statement read out on state TV Friday that raising doubts about the future of Egypt is a means to pressure public opinion.
"Announcing the results of the presidential election early, before the official statement, is unjustified and is one of the main reasons behind the division and confusion prevailing on the political scene," said the statement, without naming the Brotherhood.
The official results of the election were to be announced Thursday, but authorities postponed that, setting off a wave of accusations of fraud and manipulation aimed at all sides, including the ruling military.
The generals last week issued a constitutional declaration that gave them wide powers, many of which would have been wielded by the newly elected president. International condemnation followed, saying the decision raised doubts about the military's commitment to transferring powers to an elected civilian authority.
The military has said it would hand over power by July 1, but the generals have called that into question in recent weeks because of political uncertainties.
The council said its constitutional declaration was needed in order for the military to run the country's affairs during this "critical period."
The military council also rebuffed calls to reinstate the Brotherhood-dominated parliament, which was dissolved by a court ruling last week. The military statement said court decisions must be respected.
The military warned that any attempt to "harm public and private interests" would draw a "firm" response, suggesting it would not tolerate violent protests.