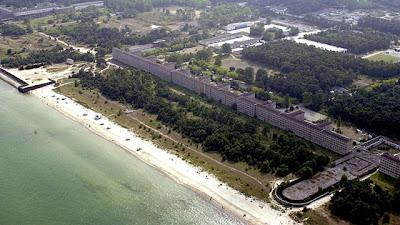 In the years preceding the Second World War the Nazis not only planned mass murder, but they also planned mass tourism in the form of the Colossus of Prora, the world's biggest beach complex along the Baltic coast on the island of Ruegen.
It housed 10,000 rooms with sea views in eight identical rectangular blocks of steel reinforced concrete, each six floors high and each one the length of five soccer fields.
The plans included restaurants, a movie theater, a festival hall, a swimming pool with waves, a nursery, a post office and a marina where Kraft durch Freude (strength through joy) cruise ships would stay.
It was supposed to be a holiday resort on an unprecedented scale, even by the standards of Nazi megalomania. The intention was to bring 20,000 working-class Germans there every week for affordable holidays in beautiful surroundings. It was thought that a vacation would allow the German proletariat to return to their work and everyday lives refreshed, with revived energy and well-prepared to both physically and mentally fulfill Hitler's dreams.
"It was a project to prepare people for the war," Jurgen Rostock, a Berlin based head of Prora Documentation Center, said in a phone interview. "Prora is an important part of Third Reich social history. It shows how the Third Reich managed to seduce and indoctrinate the Germans."
The Nazis started building in 1936, but only the main buildings were complete when World War II broke out. Instead of holidaymakers, the bare shells of the buildings were equipped to house people who had fled the bombings in Hamburg in the final stage of WWII.
Not even a single holiday maker overnighted in resort at Prora. Until now.
Last year Deutsches Jugendherbergswerk, the association of German youth hostels, opened its largest establishment there. The hostel has more than 400 beds in 96 rooms. And although it only occupies a small portion of one block, more change is afoot.
There are several exhibitions housed in one of the blocks: "Macht Urlaub" (power vacation) on Prora's sociopolitical propaganda of the Nazi regime, another on the Sobibor extermination camp and a retrospective of East German censorship of films.
And most recently, there's a Berlin-based developer who has invested 2.75 million euros in one of the five remaining blocks. The other three were ruined during the war.
Gerd Grochowiak wants to build 300 modern-day apartments, with an indoor swimming pool, wellness spa, gym, indoor playground for children, restaurants and several shops. An infinity swimming pool is also planned.
He was happy to buy this property on the sea.
"We're in a fine position. There's nothing between us and the beach and we have a permission to add balconies to each apartment," said Grochowiak in a phone interview. "The market for sale is great now in Germany, and some foreign investors from Greece, Spain, Russia, Italy and France are also interested in getting a property in Prora."
"There will be an investment of 40 million euros in a very careful reconstruction, starting summer of 2013. We expect to complete everything by end of 2014," he said.