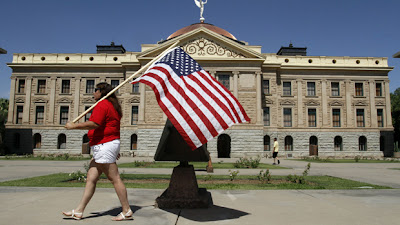 A divided Supreme Court threw out major parts of Arizona's tough crackdown on illegal immigrants Monday in a ruling sure to reverberate through the November elections.
The justices unanimously approved the law's most-discussed provision — requiring police to check the immigration status of those they stop for other reasons — but limited the consequences.
Although upholding the "show me your papers" requirement, which some critics say could lead to ethnic profiling, the justices struck down provisions that created state crimes allowing local police to arrest people for federal immigration violations. And they warned against detaining people for any prolonged period merely for not having proper immigration papers.
The mixed outcome vindicated the Obama administration's aggressive challenge to laws passed by Arizona and the five states — Alabama, Georgia, Indiana, South Carolina and Utah — that followed its lead in attempting to deal with illegal immigration in the face of federal inaction on comprehensive reform.
The administration had assailed the Arizona law as an unconstitutional intrusion into an area under federal control.
"The court has ruled essentially that, when it comes to immigration, it is the federal government’s purview and the states cannot go out and make their own immigration laws," said the CBC's Susan Bonner, reporting from Washington, D.C.
Justice Anthony Kennedy, joined in his majority opinion by conservative Chief Justice John Roberts as well as three liberal justices, said the impasse in Washington over immigration reform did not justify state intrusion.
"Arizona may have understandable frustrations with the problems caused by illegal immigration while that process continues, but the state may not pursue policies that undermine federal law," Kennedy said. That part of the ruling drew a caustic dissent from Justice Antonin Scalia, who said the Obama administration doesn't want to enforce existing immigration law.
A second opinion with potentially important implications for the presidential campaign is expected when the court meets Thursday to issue its final rulings this term.
Presidential campaign issue
The Arizona decision landed in the middle of a presidential campaign in which President Barack Obama has been heavily courting Latino voters and Republican challenger Mitt Romney has been struggling to win Latino support. During a drawn-out primary campaign, Romney and the other GOP candidates mostly embraced a hard line on the estimated 11 million illegal immigrants, though Romney has lately taken a softer tone.
Obama said he was pleased that the court struck down key parts of Arizona's law but was concerned about what the high court left intact.
"No American should ever live under a cloud of suspicion just because of what they look like," the president said in a written statement. He said police in Arizona should not enforce the provision in a way that undermines civil rights.
"What this decision makes unmistakably clear is that Congress must act on comprehensive immigration reform," Obama said.
Romney did not immediately comment on the substance of the court decision Monday, but he said, "I believe that each state has the duty -- and the right -- to secure our borders and preserve the rule of law, particularly when the federal government has failed to meet its responsibilities."
'Show me your papers'
In his majority opinion, Kennedy distinguished the "show me your papers" provision from the other challenged parts of the law by pointing out that consultation between local and federal authorities already is an important part of the immigration system. Local and state police called on the Immigration and Customs Enforcement's support center more than 1 million times in 2009 alone, he said.
Kennedy said the law could — and suggested it should — be read to avoid concerns that status checks could lead to prolonged detention. "Detaining individuals solely to verify their immigration status would raise constitutional concerns," he said, but he did not define what would constitute too long a detention.
A divided court struck down these three major provisions:
Requiring all immigrants to obtain or carry immigration registration papers.
Making it a state criminal offense for an illegal immigrant to seek work or hold a job.
Allowing police to arrest suspected illegal immigrants without warrants.
The vote was 6-2 against making it a state crime not to carry immigration papers and 5-3 against the other two provisions.
Justice Elena Kagan sat out the case because of her previous work in the Obama administration.
Governor, rights groups react
Arizona Gov. Jan Brewer said the ruling marked a victory for people who believe in the responsibility of states to defend their residents. The case, she said, "has always been about our support for the rule of law. That means every law, including those against both illegal immigration and racial profiling. Law enforcement will be held accountable should this statute be misused in a fashion that violates an individual's civil rights."
Civil rights groups that separately challenged the law over concerns that it would lead to rights abuses said their lawsuit would go on.
Even with the limitations the high court put on Arizona, the immigration status check still is "an invitation to racial profiling," said American Civil Liberties Union lawyer Omar Jadwat