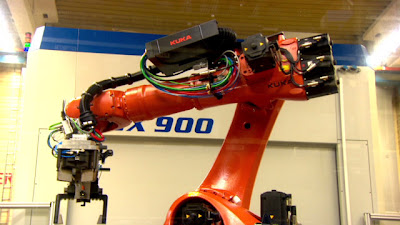 Rising wages in China may be squeezing the profits of many manufacturers -- but they are also feeding a boom in the robotics industry.
Wages in China's cities rose 12.4% last year, while in rural areas they were boosted by 21.9%, according to figures from China's National Bureau of Statistics.
While that may be good for workers, manufacturers are softening the blow to their balance sheets by turning to robotics -- which are cheaper, faster and deliver high quality.
China is the fastest growing market in robotics, and by 2014 it will top the global market, according to the International Federation of Robotics.
One company seeking to tap this demand is German-based KUKA Robotics, which is setting up a regional hub in the country.
"With the increase in the wages we can see a big automation wave coming," said Till Reuter, chief executive of KUKA Robotics.
"China is the market that is still growing, and growing at a fast pace compared to Europe and the U.S., " he said. "China will be the biggest robotic market, so it is important to be here."
The auto industry, for example, is becoming increasingly reliant on robotics. China is the world's largest auto market and European car manufacturers are setting up facilities in the region, all of which will be reliant on robotics.
BMW opened a new plant in Shenyang last month and Volkswagen plans to double its capacity to four million cars by 2018, by investing in three new plants in Yizheng, Foshan and Ningbo and upgrading existing ones in Changchun, Nanjing and Chengdu.
China's robotics industry still lags that in other countries. In Japan, for example, there are 306 robots working per 10,000 people while in China there are currently only 15.
KUKA plans to capture the potential by producing more efficient models that will continue to drive down costs for manufacturers.
"Our advantage is innovation," said Reuter, "we need to keep it alive and work towards the next generation. It gives us an advantage in China, but also in the rest of the world."
As China's robotics industry catches up with others, the country's manufacturers are also looking at other ways to bring in income.
Investment in branding and marketing is one way to boost profits, according to Alistair Thornton, a senior analyst at IHS Global Insight.
"Manufacturers will think --- hold on, if we put money into branding and charge more for products, we can retain our margin," said Thornton.