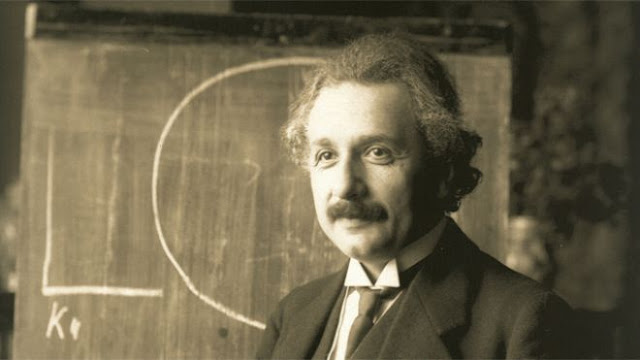 Albert Einstein ( 14 March 1879 – 18 April 1955) was a German-born theoretical physicist who developed the theory of general relativity, effecting a revolution in physics. For this achievement, Einstein is often regarded as the father of modern physics. While best known for his mass–energy equivalence formula E = mc2 (which has been dubbed "the world's most famous equation"),he received the 1921 Nobel Prize in Physics "for his services to theoretical physics, and especially for his discovery of the law of the photoelectric effect".The latter was pivotal in establishing quantum theory within physics.
Near the beginning of his career, Einstein thought that Newtonian mechanics was no longer enough to reconcile the laws of classical mechanics with the laws of the electromagnetic field. This led to the development of his special theory of relativity. He realized, however, that the principle of relativity could also be extended to gravitational fields, and with his subsequent theory of gravitation in 1916, he published a paper on the general theory of relativity. He continued to deal with problems of statistical mechanics and quantum theory, which led to his explanations of particle theory and the motion of molecules. He also investigated the thermal properties of light which laid the foundation of the photon theory of light. In 1917, Einstein applied the general theory of relativity to model the structure of the universe as a whole.
He was visiting the United States when Adolf Hitler came to power in 1933, and did not go back to Germany, where he had been a professor at the Berlin Academy of Sciences. He settled in the U.S., becoming a citizen in 1940. On the eve of World War II, he helped alert President Franklin D. Roosevelt that Germany might be developing an atomic weapon, and recommended that the U.S. begin similar research; this eventually led to what would become the Manhattan Project. Einstein was in support of defending the Allied forces, but largely denounced using the new discovery of nuclear fission as a weapon. Later, together with Bertrand Russell, Einstein signed the Russell–Einstein Manifesto, which highlighted the danger of nuclear weapons. Einstein was affiliated with the Institute for Advanced Study in Princeton, New Jersey, until his death in 1955.
Einstein published more than 300 scientific papers along with over 150 non-scientific works. His great intelligence and originality have made the word "Einstein" synonymous with genius. 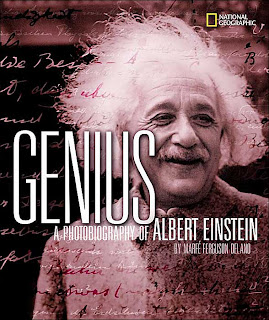 Albert Einstein in 18
Early life and education
Albert Einstein was born in Ulm, in the Kingdom of Württemberg in the German Empire on 14 March 1879. His father was Hermann Einstein, a salesman and engineer. His mother was Pauline Einstein (née Koch). In 1880, the family moved to Munich, where his father and his uncle founded Elektrotechnische Fabrik J. Einstein & Cie, a company that manufactured electrical equipment based on direct current.
The Einsteins were non-observant Jews. Albert attended a Catholic elementary school from the age of five for three years. Later, at the age of eight, Einstein was transferred to the Luitpold Gymnasium where he received advanced primary and secondary school education until he left Germany seven years later. Although it has been thought that Einstein had early speech difficulties, this is disputed by the Albert Einstein Archives, and he excelled at the first school that he attended.
His father once showed him a pocket compass; Einstein realized that there must be something causing the needle to move, despite the apparent "empty space". As he grew, Einstein built models and mechanical devices for fun and began to show a talent for mathematics. When Einstein was ten years old Max Talmud (later changed to Max Talmey), a poor Jewish medical student from Poland, was introduced to the Einstein family by his brother, and during weekly visits over the next five years he gave the boy popular books on science, mathematical texts and philosophical writings. These included Immanuel Kant's Critique of Pure Reason and Euclid's Elements (which Einstein called the "holy little geometry book").
In 1894, his father's company failed: direct current (DC) lost the War of Currents to alternating current (AC). In search of business, the Einstein family moved to Italy, first to Milan and then, a few months later, to Pavia. When the family moved to Pavia, Einstein stayed in Munich to finish his studies at the Luitpold Gymnasium. His father intended for him to pursue electrical engineering, but Einstein clashed with authorities and resented the school's regimen and teaching method. He later wrote that the spirit of learning and creative thought were lost in strict rote learning. At the end of December 1894 he travelled to Italy to join his family in Pavia, convincing the school to let him go by using a doctor's note. It was during his time in Italy that he wrote a short essay with the title "On the Investigation of the State of the Ether in a Magnetic Field."
In late summer 1895, at the age of sixteen, Einstein sat the entrance examinations for the Swiss Federal Polytechnic in Zurich (later the Eidgenössische Polytechnische Schule). He failed to reach the required standard in several subjects, but obtained exceptional grades in physics and mathematics. On the advice of the Principal of the Polytechnic, he attended the Aargau Cantonal School in Aarau, Switzerland, in 1895-96 to complete his secondary schooling. While lodging with the family of Professor Jost Winteler, he fell in love with Winteler's daughter, Marie. (His sister Maja later married the Wintelers' son, Paul.) In January 1896, with his father's approval, he renounced his citizenship in the German Kingdom of Württemberg to avoid military service. In September 1896 he passed the Swiss Matura with mostly good grades (gaining maximum grade 6 in physics and mathematical subjects, on a scale 1-6), and though still only seventeen he enrolled in the four year mathematics and physics teaching diploma program at the Zurich Polytechnic. Marie Winteler moved to Olsberg, Switzerland for a teaching post.
Einstein's future wife, Mileva Marić, also enrolled at the Polytechnic that same year, the only woman among the six students in the mathematics and physics section of the teaching diploma course. Over the next few years, Einstein and Marić's friendship developed into romance, and they read books together on extra-curricular physics in which Einstein was taking an increasing interest. In 1900 Einstein was awarded the Zurich Polytechnic teaching diploma, but Marić failed the examination with a poor grade in the mathematics component, theory of functions. There have been claims that Marić collaborated with Einstein on his celebrated 1905 papers, but historians of physics who have studied the issue find no evidence that she made any substantive contributions. 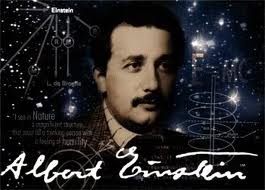