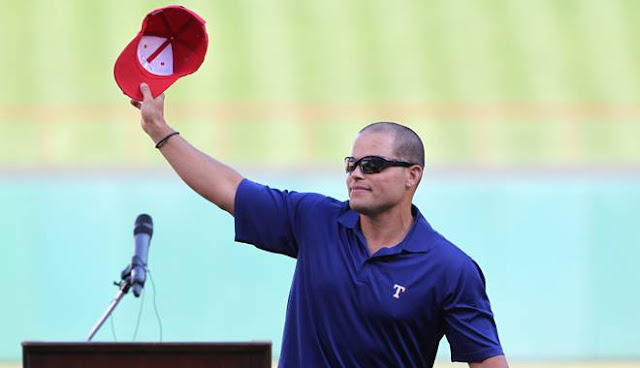 Ivan Rodriguez was honored before Monday’s Yankees-Rangers game, as the 14-time All-Star announced his retirement.A 13-time Gold Glove winner and the 1999 American League MVP, Pudge played in 2,543 games with six teams, 1,507 of them coming in a Texas uniform.

“He did things behind home plate for 20 years that I’ve never seen before,” said Alex Rodriguez, who played with Pudge in 2001-02. “He was like a ninja behind home plate. Very explosive. Everyone talks about his arm, but his feet were like lightning. An amazing, Hall of Fame career.”

Rather than throwing a ceremonial first pitch from the mound, Rodriguez got behind home plate and fired a bullet to second base, where former teammate Michael Young received the throw. That seemed fitting, given Rodriguez’s cannon of an arm that helped him throw out an amazing 46% of would-be base stealers.

“Pudge is going to go down as one of the greatest catchers to ever play,” Derek Jeter said. “We used to play against him and he basically just shut the running game down. You didn’t even think about running on him; there haven’t been too many catchers that could change games like that.” 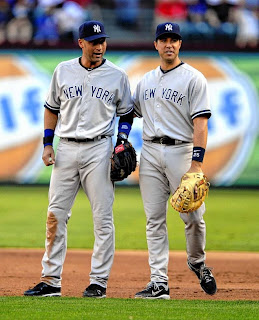 Rodriguez played 33 games for the Yankees in 2008 after being traded from the Tigers at the deadline for Kyle Farnsworth. Joe Girardi called Rodriguez, who finished his career with 2,844 hits, a .296 average, 311 home runs and 1,332 RBI, a “no doubt” Hall of Famer.

“It was enjoyable to have a chance to play against him and a short time to manage him,” Girardi said. “Pudge was the elite class, no doubt about it. You just didn’t run on his teams and when you did you were caught 50% of the time. He changed the way you played against him. There aren’t too many guys that can do that from back there.”

FREDDIE STEADY
Girardi hasn’t decided whether he’ll start CC Sabathia or Freddy Garcia Saturday against the Tigers, but the manager stressed that whichever way he goes, Garcia will remain in the rotation.“We’re not sure what we’ll do, if we’ll put Freddy there or bring CC back on his normal rest, but Freddy’s going to pitch again,” Girardi said. “Freddy’s going to start again.”
Garcia is 0-1 with a 9.75 ERA, but Thursday’s off-day would allow the Yankees to bring Sabathia back on regular rest and skip Garcia’s spot this time through the rotation.