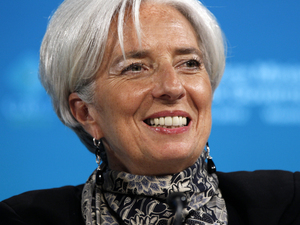 International Monetary Fund officials and members of the G-20 nations announced Friday that member countries have pledged $430 billion to add to the Fund's crisis-fighting arsenal.
The aim is to amass enough resources to handle any further problems emerging from the prolonged debt crisis in Europe. The funding is not without its skeptics or caveats, however.
The announcement came at the annual World Bank-IMF spring meetings in Washington, D.C. The Fund's managing director, Christine Lagarde, came into these meeting with a goal of raising $400 billion from member states. She was clearly happy and relieved as she announced a number larger than that.
"What is important to us at the IMF is that we know that we have commitments that are north of $430 billion, and that almost doubles the lending capacity of the fund," she said.
Largarde said the added funds would help create stability in the global economy. Most recently, investors have again become nervous about Spain's prospects and pushed up its borrowing costs. Officials believe the added firepower at the IMF will help give investors confidence that there will be no more defaults in Europe like the one in Greece. But Simon Johnson, a former chief economist at the IMF, is skeptical.
"The Europeans' problem is an internal-governance and structure-of-the-eurozone problem. This amount of money is small relative to what, for example, Italy would need if it were to get into trouble," says Johnson, now a fellow at the Peterson Institute for International Economics. "So, at the margins, a little bit more money can help. But the core problems are absolutely not addressed by this."
Lagarde, though, hailed the commitment of funds as a huge collective effort by the Fund's member states.
"Really a sense of accomplishment and a sense of a collective drive from the international community to actually tackle the right issues at the root and to have the right tools in the tool box," she said.
Yet the IMF's most powerful member, the United States, was not a part of that collective action. It declined to contribute any funds. U.S. Treasury secretary Timothy Geithner provided the rationale in remarks earlier this week.
"Europe is a relatively rich continent. It's absolutely has the resources to manage this problem. It's got to play the dominant financial role," he said.
In fact, European nations contributed the initial $200 billion to the IMF fund drive.
Many observers point to another reason the Obama administration may have decide to stand on the sidelines: There's almost no chance Congress would have approved of further IMF funding, and the White House didn't want to have that fight during an election year.
What finally put the fundraising over the top were commitments from big emerging-market countries: Brazil, Russia, India and China, the so-called "BRIC countries." But the commitments have a caveat. The pledges have yet to be approved by their home governments. That's a bit of a diplomatic dance, Johnson says.
"The bigger emerging markets feel they've come of age. They've got ready cash now," he says. "They're willing to put their money where their mouths are, but in return they want to be recognized as more important players on the global stage."
The less-than-full commitment gives these countries some continued leverage to make sure the IMF follows through on its promises to give emerging-market nations more voting power and a greater voice at the IMF. That's supposed to happen by October.