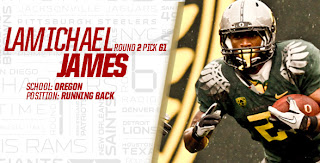 Coach Jim Harbaugh still thinks "from time to time" about the one that got away, the only defeat his 2010 Stanford team endured before he joined the 49ers last year.In that 52-31 loss at Oregon, LaMichael James ran for 257 yards and three touchdowns against a Cardinal team that won its eight remaining games.Now the electric James is on Harbaugh's side, by virtue of Friday's second-round selection in the NFL draft."I'm stoked about it," James, the 61st overall pick, said on a conference call from his hometown of Texarkana, Texas.Added Harbaugh: "I've seen him play up close, seen all the things he can do. (We) lost games to his team by a large degree (because) of his efforts."The 49ers made no other additions Friday, trading away their third-round pick (92nd overall) to the Indianapolis Colts for the second pick in the fourth round (97th overall) Saturday and the Colts' fifth-round choice next year.James' arrival extends an offseason trend of adding offensive weapons, including Thursday's first-round selection of wide receiver A.J. Jenkins. Four veterans were acquired in free agency: running backs Brandon Jacobs and Rock Cartwright, and wide receivers Mario Manningham and Randy Moss."What we've tried to do is add speed and explosiveness to this offense," 49ers general manager Trent Baalke said. "And with these two (draft selections), it's done that." And just so there's no confusion about who's running that offense, Harbaugh declared Alex Smith as the starting quarterback -- "It's something he's earned.James (5-foot-9, 195 pounds) ran for an Oregon-record 5,082 yards and 53 touchdowns in three seasons. He finished third in the Heisman Trophy voting in 2010 behind Cam Newton and Andrew Luck.


"He's a playmaker, and he's done it against the best in college football, which is hard to do," Baalke added.
James made two Rose Bowl trips that were sandwiched around the 2010 season's BCS National Championship game, in which he gained only 49 yards in a 22-19 loss to Auburn.
James used the term "awesome" to describe 49ers rushing mainstay Frank Gore, noting: "If I have to sit behind him and learn, I look at that as an opportunity to get better." 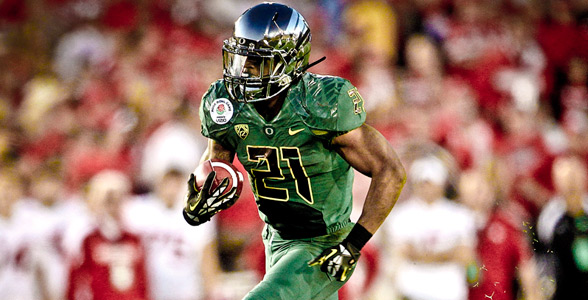 Gore has not shown for voluntary offseason workouts, but his absence has not raised concerns. Harbaugh stated that Gore has kept in touch and that the seven-year veteran is tending to personal business.
But don't think James' and Jacobs' arrivals are anything more than adding to teamwide competition. "You ask the question, 'Is it an indictment on Frank Gore?' My God no," Harbaugh said.The 49ers might keep up to four running backs, along with fullback Bruce Miller and special teams ace Cartwright. Kendall Hunter and Anthony Dixon also will vie for roles in the rotation with Gore, Jacobs and James.That competition is coming "real, real, real fast," Harbaugh said.The speedy James rushed for over 100 yards in 26 of 37 games, doing so in three consecutive games last season, a stretch that culminated with a 239-yard effort in a 43-15 rout of Cal. He was suspended for the 2010 season opener after pleading guilty to physically harassing a former girlfriend.In two games against a Harbaugh-coached Stanford teams, James had 49 carries for 382 yards and four touchdowns. Said James: "Even after we played, I would say I would love to play for a coach like that, how intense he is and how physical he wanted his team to be."Harbaugh mentioned another of James' skills: "The unstoppable nature of him at the goal line. ... You could not stop that team inside the 5-yard line."
James said he's willing to do anything asked of him, from running and catching the ball to covering kickoffs or even blocking field goals.
"I haven't blocked any -- yet," James said. "Coming soon I'm going to block some."