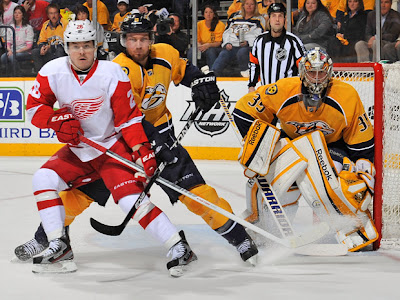 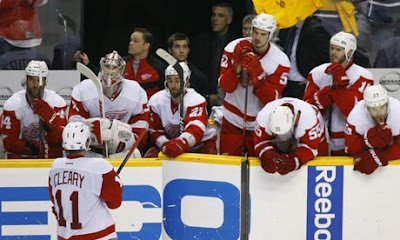 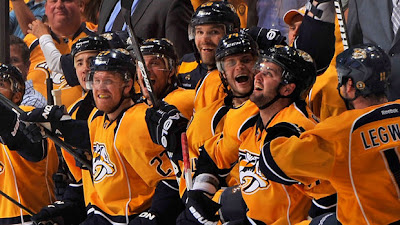 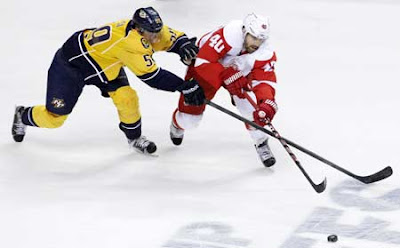 NASHVILLE, Tennessee — The Nashville Predators knocked Detroit out of the National Hockey League (NHL) play-offs on a Detroit native's game-winner while the Pittsburgh Penguins stayed alive with a 3-2 victory over the Philadelphia Flyers on Friday. David Legwand, who grew up in Detroit, scored 13 seconds into the third period to give Nashville the 2-1 win and the series in Game Five of the best-of-seven Western Conference first round series.
"Detroit's the gold standard in the Central Division," Nashville coach Barry Trotz told reporters. "For David to sort of seal the deal tonight, the way he played I thought it was great." The Predators became the first NHL team to clinch an opening round series, winning three consecutive games against the Red Wings.
Alexander Radulov had given the Predators the early lead in the first period before Jiri Hudler equalised in the second.
The loss marked the first time since 2006 that Detroit had been eliminated in the opening round of the play-offs.
"We tried lots of combinations ... and in the end I didn't think we had a whole lot of help for Pavel (Datsyuk) for whatever reason," said Detroit coach Mike Babcock.
In Pittsburgh, goaltender Marc-Andre Fleury shut down the Flyers for the final two periods and the Penguins avoided elimination from the Eastern Conference play-offs for a second consecutive game.
Jordan Staal and Tyler Kennedy both had a goal and an assist for the host Penguins, who used the come-from-behind win to pull within a game of the Flyers at 3-2 in their best of seven series. Philadelphia had won the first three games.
Game Six is in Philadelphia today.
"It's still do-or-die for us," said Staal, who had his sixth goal of the series. "We're going to go into Philly and hopefully do the same thing we did (Friday)."
Fleury gave up two power-play goals to Matt Carle and Scott Hartnell in the first period, but denied the Flyers the rest of the game, making 14 of his 24 saves in the final period.
He had seven stops during a Philadelphia power-play midway through the third.
Steve Sullivan had scored a power-play goal for Pittsburgh in the first period before Staal tied the score at 2-2 6:15 into the second and less than four minutes later Kennedy gave the Penguins the lead for keeps.