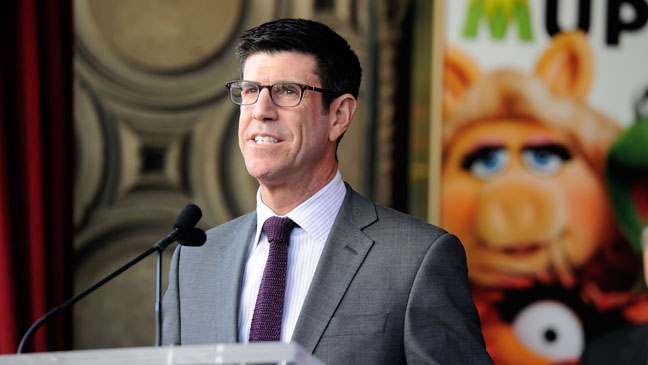 Rich Ross, who had enjoyed great success running Disney's cable channels but struggled in the top post at the film studio, has resigned
"I no longer believe the chairman role is the right professional fit for me," Ross said in a statement released by Disney on Friday. "For that reason, I have made the very difficult decision to step down as chairman of the Walt Disney Studios, effective today."
Ross, hired by Disney CEO Bob Iger in October 2009, stirred controversy by pushing many seasoned executives out of the studio and hiring outsider MT Carney to run marketing. She left Disney in January. But no doubt his greatest setback was the failure of the big-budget John Carter, which led to a $200 million write-down for the company in March.

That also reportedly led to friction and complaints from Pixar's John Lasseter, who also is chief creative officer at Walt Disney Animation Studios.
Iger praised Ross in a statement released Friday: "For more than a decade, Rich Ross’s creative instincts, business acumen and personal integrity have driven results in key businesses for Disney, redefining success in kids and family entertainment and launching franchises that generate value across our entire company. His vision and leadership opened doors for Disney around the world, making our brand part of daily life for millions of people. I appreciate his countless contributions throughout his entire career at Disney and expect he will have tremendous success in whatever he chooses to do next."
It has long been difficult for an "outsider" from television to gain traction in the industry's insular film studio culture, as such executives as Brandon Tartikoff and Gail Berman learned during brief and unhappy tenures at Paramount. The same was true of Ross, whose manner struck some in the industry as detached and even patronizing.
Ross greenlighted few projects during his tenure at the studio. His first movie, the low-budget high school dramedy Prom, grossed just $10 million worldwide and struck some observers as a film more suited for television. Two other Disney projects initiated under Ross, Sam Raimi's Oz: The Great and Powerful and the Johnny Depp starrer The Lone Ranger, are $200 million-plus gambles. Ross' negotiation on Lone Ranger brought the studio press attention last summer when he and Iger held a hard line with producer Jerry Bruckheimer and director Gore Verbinski to trim costs.
Ross' abrupt resignation leaves the question of who will take the job. Given Disney's decision to dial back on the number of films that the studio produces -- as well as Iger's reputation for disliking the movie business generally -- the job might have limited appeal to top candidates. On the other hand, studio chief jobs rarely become available, and the relative stability atop Disney's rivals means the job will still be coveted. The lack of a deep bench left in the wake of Ross's tenure would seem to make the addition of a seasoned executive a necessity.
Read Ross' resignation letter below:
For the last 15 years, I have had the opportunity to work with incredibly talented people on behalf of the world’s best loved brand. During that time, we’ve told some amazing stories around the world, created successful TV programming, movies and franchises that generated new opportunities for the company in the process.

I’ve always said our success is created and driven by our people -- whom I consider to be the absolute best in the business. But, the best people need to be in the right jobs, in roles they are passionate about, doing work that leverages the full range of their abilities. It’s one of the leadership lessons I’ve learned during my career, and it’s something I’ve been giving a great deal of thought to as I look at the challenges and opportunities ahead.

I believe in this extraordinary Walt Disney Studios team, and I believe in our strong slate of films and our ability to make and market them better than anyone else. But, I no longer believe the Chairman role is the right professional fit for me. For that reason, I have made the very difficult decision to step down as Chairman of The Walt Disney Studios, effective today.

It has been my honor to work with such incredible teams -- at Disney Channels Worldwide and The Walt Disney Studios and the many other Disney businesses I’ve had the opportunity to collaborate with. I know I leave the Studios in good hands and, even on separate paths, I am confident we are all destined for continued success.