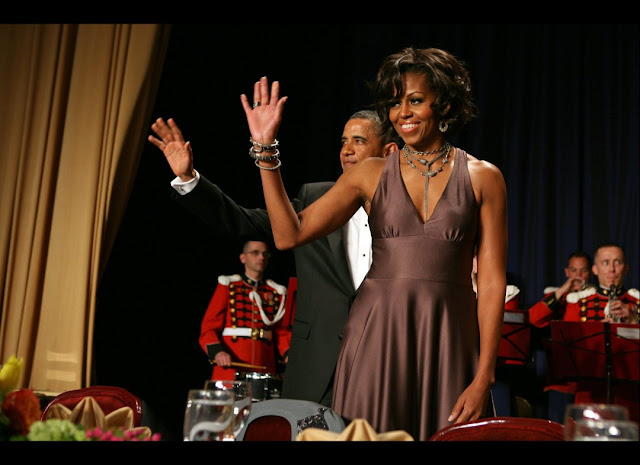 The White House Correspondents’ Association Dinner weekend officially began Friday night with a flurry of news media-hosted parties that featured major stars of film and television knocking back drinks and darting through crowds to access cordoned-off VIP lounges.
Official sign that the wonky cocktail-apalooza has begun? Ann Perkins of “Parks and Recreation” — aka Rashida Jones, whom I spotted only in quick passing at Friday’s Time/People magazine cocktail reception, where the bold-facers mingled freely among the mere mortals — tweeted the following photo from the top of the W hotel, where the New Yorker’s reception was held.Jones was joined at the Time/People festivities by Jesse Tyler Ferguson of “Modern Family,” who hopped from that reception to the New Yorker party to the late-night fete co-sponsored by the Atlantic Media, Funny or Die and the Impact Film Fund. He politely demurred when I tried to ask him a few questions at the Time reception, but seemed grateful when I complimented his just-perfect-for-Washington plaid bow tie. (See photo below of Ferguson with boyfriend Justin Mikita, right, who also rocked a bow tie.)

Greta Van Susteren attended the Time/People reception but minus invited guest Lindsay Lohan , who had to hop a later flight to D.C. after missing her originally scheduled 1 p.m. travel time. So did Daniel Dae Kim, who chatted for a few moments (more on that momentarily).
Later, at the Funny or Die/Atlantic/Impact Film Fund event, the statuesque Charlize Theron, dressed in a casual jacket and skinny jeans, chatted with Rosario Dawson in a roped-off area for VIPs while regular people stood outside the velvet barriers, gawking at the two women as if they were long-legged, uber-attractive mammals in some sort of celebrity zoo (which, frankly, they were.)