Microsoft has invested $300m (£185m) in a digital venture with US bookseller Barnes and Noble.

The deal could make Barnes and Noble's Nook e-book reader available to millions of new customers, integrating it with the Microsoft's new Windows 8 operating system.

The as-yet unnamed new company will be 82.4% owned by Barnes and Noble, with Microsoft getting a 17.6% stake.It will house the bookseller's digital and college education book businesses. 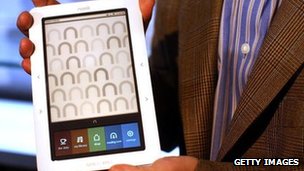 Barnes and Noble's Nook was launched in 2009

But some industry commentators believe publishers will be "terrified" at the implications of the deal.

"This deal with Microsoft could be the saviour of its digital division but won't help the bricks and mortar business," Tim Coates, managing director of Bilbary, an e-book content provider, told the BBC. "In fact it could accelerate its decline.

"Publishers will be terrified of Barnes and Noble going digital only."

Barnes and Noble did announce at the beginning of the year that it was looking at splitting off its digital business. It said it does not yet know whether it will float the new company.

The Nook e-reader was launched in 2009 to compete with Amazon's Kindle, allowing users to buy, download and read digital versions of books and magazines.

Microsoft sued Barnes and Noble in March last year, alleging the Nook, which runs on the Google Android operating system, infringed its patents.

The deal would seem to indicate an end to hostilities.

Traditonal bookseller chains have been struggling to cope with the e-book revolution and some have found it difficult to compete against Amazon's distribution of cut-price physical books.

The rise of the digital-only e-books and dedicated e-readers has only compounded their problems.

Borders closed last year, leaving Barnes and Noble as the only major US book chain, with just under 700 branches. It also has 641 specialist college bookshops.

Sales of e-books, with their low production and distribution costs, have now oustripped sales of print titles in many cases.

"Our belief is that there will remain a substantial market for dedicated e-readers, although to reach the widest audience companies now need to make their e-reader apps available on as many devices as possible."

Amazon's Kindle service is already available as an app on the Windows 8 operating system, due to launch this autumn.'Exciting collaboration'

The Nook's content will now be available to the growing number of people with mobile devices running Microsoft software.

"Microsoft's investment in Newco [the temporary name for the new digital and college unit], and our exciting collaboration to bring world-class digital reading technologies and content to the Windows platform and its hundreds of millions of users, will allow us to significantly expand the business," said William Lynch, chief executive of Barnes & Noble.

The Windows 8 operating system is specifically designed to work with touch screens and mobile devices like tablet computers.

Its Metro user interface can host small dedicated applications like Nook to sit on top of Windows.

"Our complementary assets will accelerate e-reading innovation across a broad range of Windows devices, enabling people to not just read stories, but to be part of them," said Andy Lees, president at Microsoft.

"We're on the cusp of a revolution in reading."

At one point during the day Barnes & Noble shares jumped 85% in early trading, reaching $25, the highest level since 2009, before falling back later in the day.