Sharapova out to toughen up on clay Germany (AFP) - Tennis diva Maria Sharapova says she is relishing making her Stuttgart debut here as the clay-court season gets under way with the statuesque Russian up against all four grand slam winners.
The 25-year-old has added Stuttgart to her usual WTA clay-court events in Rome and Madrid as she looks to prepare for the French Open at the end of May, which is the only grand slam event she has yet to win.
Having reached the Australian Open final in January, Sharapova says her aim is to work on her strength as her persistent shoulder problems finally seem to be over following her last surgery in 2009. 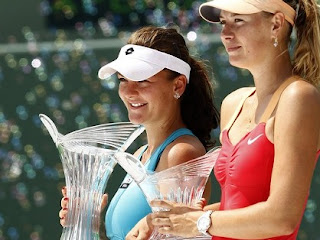 "My goal for this years clay court season is to improve even more physically," said the Russian, who is seeded second here behind world number one Victoria Azarenka.
"I can withstand longer matches and I recover better, I'm still learning about the clay court game which is a little bit like a 'cat and mouse' game', as the ball comes back more often and differently."
All current grand slam champions will be appearing in Stuttgart.
Top seed and world number one Azarenka of Belarus is joined by US Open winner Samantha Stosur of Australia and Wimbledon champion Petra Kvitova of the Czech Republic.Stuttgart heralds the start of the women's clay-court season ahead of Roland Garros at the end of May where China's Na Li will be looking to defend her title and Sharapova is relishing the challenge in Germany.
"I came here because as it is the first time that it fits into my schedule," said Sharapova who lost in the final at her previous two WTA tournaments in Miami and Indian Wells.
"Usually I do only Rome and Madrid before Paris, but this year I had an extra week so it worked out for me.
"It is such a short clay court season, so I took this chance.
"I think the last time I was in Germany it was in Berlin in '05 or '06, so it is quite exciting to come back as I am so used to knowing a tournament.
"So it is interesting to experience it as new."Having lost to Azarenka in the final at both the Australian Open and Indian Wells, Sharapova says the world number one is the name to beat in Stuttgart.
With a brand-news sports car on offer for the winner here, Sharapova says she enjoys being in Germany for the speed, where there are no limits on the country's motorways.
"I like a lot of things about Germany - the cars, the speed - I drove here myself from Munich and the driver just said 'Could you please drive normally?," she said with a smile."
With qualifiers being held on Monday, the main draw gets underway on Tuesday with the top four players -- Sharapova, Azarenka, Poland's Agnieszka Radwanska and Kvitova -- receiving a bye into the second round.