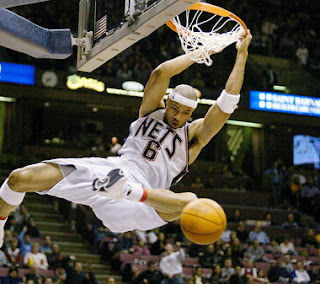 The New Jersey Nets played their final game in the Garden State on Monday night, and the occasion was enough to bring out a sellout crowd.
Rapper and part-owner Jay-Z came. So did former Nets Michael Ray Richardson, Derrick Coleman, Kenny Anderson and Kendall Gill, among others.There were video messages from Jason Kidd, Kenyon Martin, Vince Carter, Buck Williams and even fan favorite Brian Scalabrine. And there was a Bruce Springsteen "Born to Run" video played with Nets highlights at the end.Kidd wanted to be here in person, but he has a championship to defend in Dall
"We had some great times in New Jersey," Kidd said in a text message on Monday. "No matter how many people came to the game."Just like when relationships end, even the most tumultuous or drama-filled ones, you can't help but think about the beginning when it's over.
Kidd would have been thrilled to play before a crowd like this one on Monday night. In fact, he might've given the Nets a discount on his $103 million contract when he re-signed if the Nets had drawn the way they did on this final night of NBA basketball in New Jersey.When he made his Nets debut on Oct. 30, 2001, only 8,749 were there to witness the beginning of what is now remembered as the Nets' golden era. And that number may have been embellished at that."We might have had 3,000 people," Kidd loves to recall. "I think Michael Jordan and the Wizards were playing the Knicks that night and the Yankees were in the World Series, too. We were up against a lot of stuff." 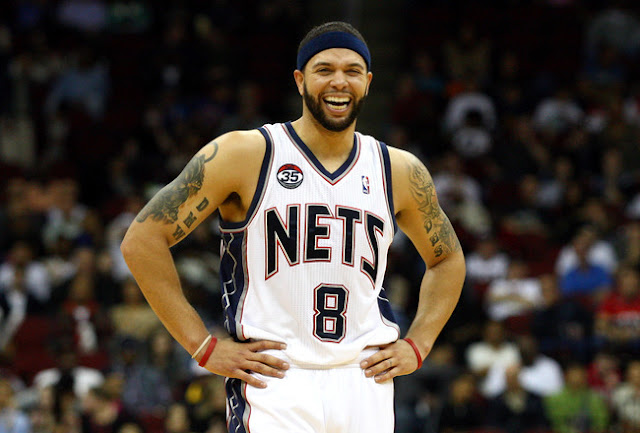 During the majority of their 35 seasons in New Jersey, the Nets seemed to be up against more stuff than any other NBA franchise. They seemed to be cursed from the moment they sold Dr. J to the Philadelphia 76ers in 1976.
Their history is well-documented. The past three-plus decades have been filled with losses -- 1,635 defeats, to be exact -- some tragic moments, too many injuries to remember, and enough drama to make the Nets the longest-running NBA reality show before there were even reality shows on TV.
The New Jersey Nets were rarely dull. They would have exciting spurts and tease fans from time to time before something bad would inevitably happen. Unfortunately, even the worst happened to the franchise.
"I thought we had something but Drazen [Petrovic] got killed in a car accident and that turned the organization back a few years, maybe even longer than that," Anderson said. "We were on the cusp. We could compete with the best, and it took us back. That was the problem with the Nets. Always settled for mediocrity."
"We joked around, me and Derrick, we used to practice at APA trucking facility," Anderson continued. "We'd share a locker next to a trucking guy. The Nets had different coaches, different players, it was like a revolving door. There wasn't no consistency with the organization. We had seven owners at the time."
But Anderson proudly pointed to how Kidd turned things around. The organization did the same. The Nets appropriately paid their respects to past stars such as Buck Williams, but they got the biggest cheers when showing videos or highlights from the Nets' two NBA Finals runs. Even Scalabrine drew a roar when his video message was played.