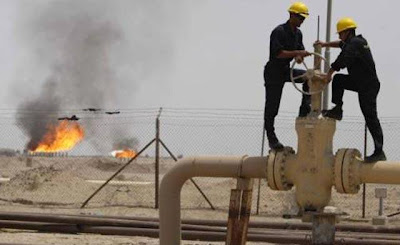 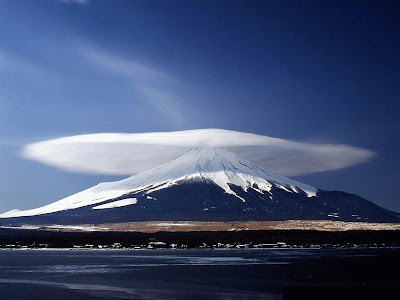 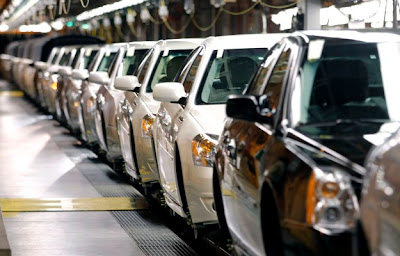 Oil traded near the highest level in three days after Iraq halted some crude exports and International Monetary Fund members pledged more than $430 billion to help protect the global economy.
Futures were little changed in New York after rising 0.2 percent last week. Iraq stopped shipments from its northern fields because of a fault at a pipeline network in neighboring Turkey, the Oil Ministry said. IMF members agreed to almost double commitments to the fund at its spring meetings in Washington yesterday. Manufacturing in China, the world’s second-biggest oil consumer, may contract for a sixth month, according to a survey released today.
“Globally, we’re walking the tightrope between falling off into recession and launching into a sustainable boom, and the current calm state of oil prices is reflecting that,” said Michael McCarthy, a chief market strategist at CMC Markets Asia Pacific Pty in Sydney. “We’re likely to ping-pong around until we get some direction on global growth prospects.”
Crude for June delivery was at $103.82 a barrel in electronic trading on the New York Mercantile Exchange, down 6 cents, at 2:01 p.m. Singapore time. The contract climbed 1.1 percent to $103.88 on April 20, the highest close since April 17. Front-month prices have advanced 5.1 percent this year.
Brent oil for June settlement on the London-based ICE Futures Europe exchange was at $118.69 a barrel, down 7 cents. The European benchmark contract was at a premium of $14.87 to New York futures, compared with $14.88 on April 20.
Goldman Sachs Trade
Goldman Sachs Group Inc. closed a recommendation to sell New York crude futures for May and buy June contracts after the trading strategy resulted in a loss of 17 cents a barrel. The recommendation was first made Feb. 7 on speculation that oil inventories in Cushing, Oklahoma, would rise before the reversal of the Seaway pipeline, which will transport crude to the U.S. Gulf Coast.
While stockpiles did increase, a buildup of storage capacity at Cushing probably kept the level of supplies from creating greater pressure on the spread between the two contracts, David Greely, head of energy research at Goldman in New York, said in the report e-mailed today.
Exports from Iraq’s northern fields stopped at 7:45 p.m. local time on April 21, the ministry said in a statement on the website of the official National Media Center. The country normally exports 450,000 to 500,000 barrels a day through Turkey.
Iraq, IMF
Iraq, the third-largest producer in the Organization of Petroleum Exporting Countries, pumped an average of 2.81 million barrels a day last month, according to estimates compiled by Bloomberg. It ships most of its oil from the south on tankers sailing from the Persian Gulf.
The IMF agreed to pledge extra funding amid concern the global economic recovery is slowing and after Managing Director Christine Lagarde said she needed to ensure the body is able to protect troubled countries. She fell short of her $600 billion goal as the U.S. declined to chip in, while Canada proposed making it harder for Europe to tap aid.
The preliminary reading of China’s purchasing managers’ index was 49.1 for April, compared with a final 48.3 for March, according to HSBC Holdings Plc and Markit Economics. A number below 50 signals contraction. The report adds pressure on officials to adopt more policies to stimulate economic growth.
U.S. Demand
Oil may be supported by increased demand in the U.S., the world’s biggest user of the commodity. Consumer spending gained 2.3 percent last quarter, according to the median estimate of 25 economists surveyed by Bloomberg News before an April 27 Commerce Department report. That would be the largest increase since the end of 2010.
U.S. gasoline demand climbed in March for a second month even as total fuel usage declined, an American Petroleum Institute report on April 20 showed. Deliveries of the motor fuel, a measure of consumption, rose 3 percent to 9.01 million barrels a day last month from March 2011 in the second year-on- year demand gain since February 2011, the industry group said.
Total deliveries of petroleum products fell 1.3 percent to 19 million barrels a day in March, according to the API. The peak U.S. demand period for gasoline starts with the Memorial Day holiday in May and ends on Labor Day in early September.
“We’re entering the driving season so consumer confidence will be a guide to what sort of consumption of petrol we’ll see over the period,” said McCarthy at CMC Markets. “Any expansion of activity will be seen as a positive and supportive of higher oil prices.”
Pump Prices
The average price for regular gasoline at filling stations dropped 5.44 cents to $3.9127 a gallon, according to Lundberg Survey Inc. The survey covers the two-week period ended April 20 and is based on information received from about 2,500 stations by the Camarillo, California-based company. The price is 3.27 cents higher than a year earlier, when the average was $3.88.
Money managers, including hedge funds, commodity pools and commodity trading advisers, increased bullish oil wagers by 7,477, or 3.9 percent, to 199,304 futures and options combined in the seven days ended April 17, according to the U.S. Commodity Futures Trading Commission’s Commitments of Traders report on April 20. That’s the first gain in five weeks.