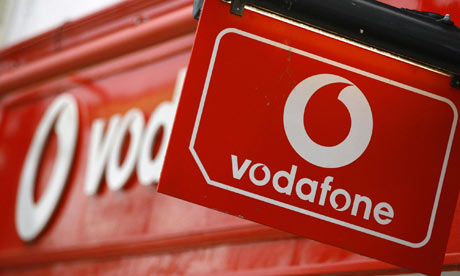 Vodafone Group Plc (VOD) agreed to acquire Cable & Wireless Worldwide Plc (CW/) for 1.04 billion pounds ($1.7 billion) in cash, adding a U.K. fixed-line network to its mobile-phone system.
The world’s largest wireless operator will pay 38 pence a share in an offer recommended by Cable & Wireless directors, the companies said in a statement today. The stock closed at 32 pence in London on April 20, giving the company a market value of 879 million pounds. It has gained 62 percent since Vodafone publicly expressed interest Feb. 13.
Vodafone became the sole bidder for London-based Cable & Wireless after Tata Communications Ltd. (TCOM) last week failed to agree on a price and decided against making an offer. Newbury, England-based Vodafone is pursuing a European fixed-line acquisition for the first time since 2010, when it ended talks to buy Germany’s Kabel Deutschland Holding AG. (KD8)
“Vodafone could benefit from a combination of revenue synergies, cost synergies and tax assets which together could be worth 1 billion pounds,” Bank of America Merrill Lynch analysts led by Wilton Fry wrote in an April 20 note.
The company, tracing its roots to 1866 when the first submarine cable across the Atlantic Ocean was laid, has holdings in more than 60 global cable systems. It also owns the largest U.K. fiber system for businesses, which Vodafone may use to relieve the strain of surging data traffic on its mobile-phone system.

“The acquisition of Cable & Wireless Worldwide creates a leading integrated player in the enterprise segment of the U.K. communications market and brings attractive cost savings to our U.K. and international operations,” Vodafone Chief Executive Officer Vittorio Colao said in the statement.
Separated from its parent company in March 2010, Cable & Wireless was once worth 2.4 billion pounds. The stock has lost 65 percent of its value in the past two years. In November, the company suspended future dividend payments as sales fell in its traditional voice network.
Gavin Darby, a former Vodafone executive who replaced John Pluthero as Cable & Wireless’s CEO in November, said Feb. 16 that he would rethink network investments in the U.K. and overseas. The company plans to simplify its business and management structure and cut more head office jobs, with “more significant, strategic decisions” due next month.
Vodafone fell 0.5 percent to 171.5 pence on April 20. The stock is down 4.1 percent this year on the London exchange.