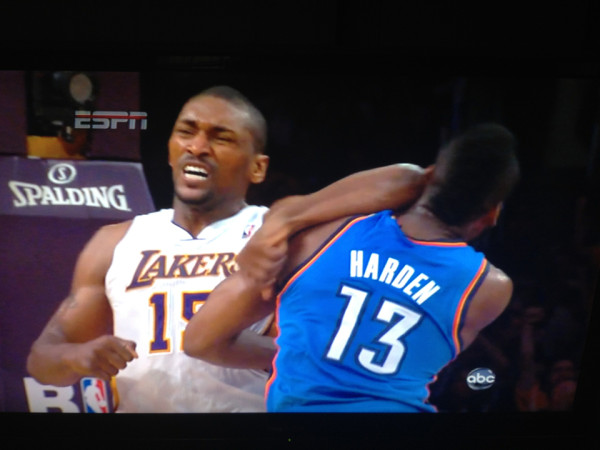 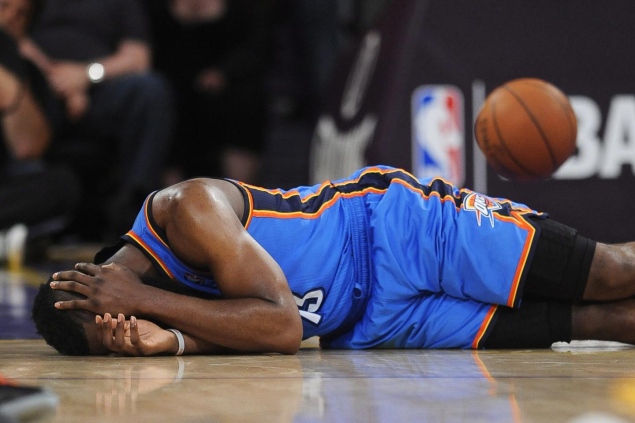 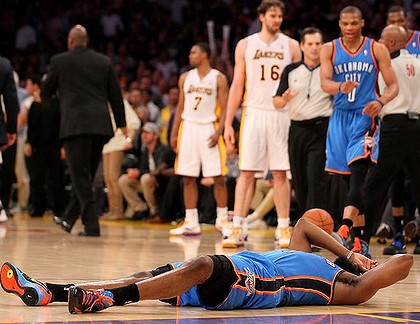 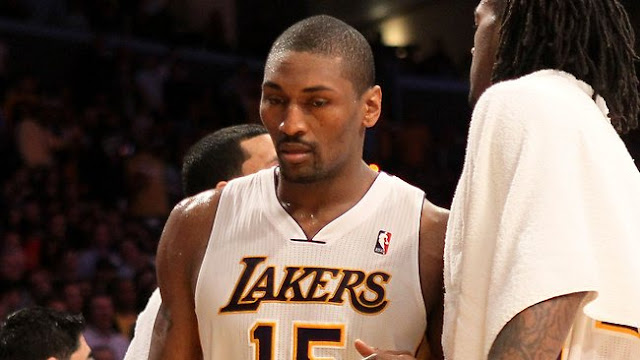 Metta World Peace was subdued and contrite in the Los Angeles Lakers' locker room, apologizing to Oklahoma City Thunder guard James Harden for throwing the elbow that sent them both to the locker room in the second quarter of the Lakers' 114-106 double-overtime victory.World Peace had just dunked over Kevin Durant and Serge Ibaka on a fast break and was headed back up court when he ran into Harden. While pounding his chest with his right arm, World Peace raised his left elbow over Harden's shoulder and cleanly hit Harden in the back of the skull.

Harden dropped to the court and stayed down for about a minute before heading to the locker room. Ibaka and other Thunder players challenged World Peace but were kept apart, and World Peace was ejected on a flagrant foul-2 after the referees reviewed the tape.
The NBA will review the play, and if Harden is out for any length of time, that could affect the length of what in all likelihood will be a suspension for World Peace.

Harden, who had 14 points, told ABC reporter Lisa Salters he had "a little bit of a headache."
ABC/ESPN's Magic Johnson, a Hall of Famer and former Laker, said of World Peace's play,

"I got real emotional and excited, and it was unfortunate that James had to get hit with the unintentional elbow," said World Peace, who had scored 12 points and played solid defense on Durant. "I hope he's OK. Oklahoma, they're playing for a championship this year. I apologize to the Thunder and James Harden. It was just unfortunate."

Bryant and other Lakers acknowledged World Peace is likely to face a multi-game suspension with one game left in their regular season. "I'm just happy my teammate is all right," said Durant, who scored 35 points on 11-for-34 shooting. "It was a bad play. Hopefully Ron (World Peace) didn't do it intentionally or have any malicious intentions on that. We've got to move past that."

Harden left the court, but came out of the locker room to the Thunder bench in the third quarter intending to try to give it a go after passing the baseline tests administered by the Lakers physician for a possible concussion. Instead, he returned to the locker room without playing.
"It was intentional — and a cheap shot."

World Peace, who changed his name from Ron Artest last year, has been mostly well-behaved during his three seasons with the Lakers, including contribution to an NBA championship. Infamy precedes him, most notably his 86-game suspension for participating in the brawl in the Palace of Auburn Hills stands while playing for the Indiana Pacers against the Detroit Pistons in November 2004.