Smartphones with Google's Android and Apple's iOS mobile operating systems continued to gobble up market share in the first quarter of this year with 84 percent of the smartphones shipped, compared to 54.4 percent for the same period last year.The Android juggernaut was especially strong, with 59 percent of the 152.3 million smartphones shipped in the first quarter of this year, up from 36.1 percent last year, according to IDC's Worldwide Quarterly Mobile Phone Tracker. The iPhone represented 23 percent of shipments in the first quarter, compared to 18.3 percent last year.The widening gap between Android-iOS shipments and those of other smartphones, those that run BlackBerry or Windows Phone or Nokia's older Symbian OS, shows the two giants "have successfully distanced themselves from previous market leaders," IDC said.

"The popularity of Android and iOS stems from a combination of factors that the competition has struggled to keep up with," said Ramon Llamas, senior research analyst with IDC's Mobile Phone Technology and Trends program, in a statement."Neither Android nor iOS were the first to market with some of these features, but the way they made the smartphone experience intuitive and seamless has quickly earned a massive following." It's highly likely that the affordability of many Android phones, and even some iPhone models, also helped their appeal.

Symbian's decline is expected, as Nokia partnered with Microsoft to concentrate on making phones using the Windows' mobile OS.(Msnbc.com is a joint venture of Microsoft and NBC Universal).Research In Motion's BlackBerry OS, struggling for the last few years, has seen "a downward trajectory as demand for older BlackBerry devices decreased and the market awaits the official release of BB 10 smartphones later this year," IDC said. The research firm also said RIM is being hurt by the fact that more and more companies are allowing employees to use their own smartphones for company use, and those employees are not choosing BlackBerrys.

Windows Phone devices, which had 2.2 percent of first quarter shipments, have "yet to make significant inroads in the worldwide smartphone market, but 2012 should be considered a ramp-up year for Nokia and Microsoft to boost volumes," IDC said.Android "boasted the longest list of smartphone vendor partners," IDC said, with Samsung being "the largest contributor to Android's success, accounting for 45.4 percent of all Android-based smartphone shipments." 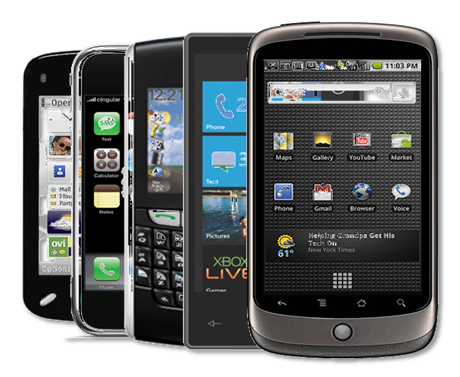