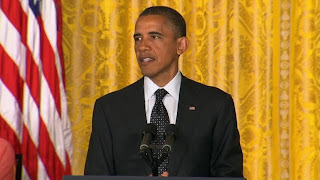 President Barack Obama has caused an outcry in Poland after referring to a Nazi death camp as "Polish".

He made the remark at a ceremony in which he posthumously awarded Polish resistance fighter Jan Karski with the Presidential Medal of Freedom.

Poles suffered a brutal Nazi wartime occupation and reject any suggestion of responsibility for Nazi crimes.

Poles are particularly sensitive to comments linking their country to the Holocaust.

For years, they have objected to any description of Nazi German death camps as "Polish" because it can indicate involvement in the mass murder of millions of European Jews in camps built on their land.
Apology demanded

Polish Prime Minister Donald Tusk stopped short of calling for an apology but said he wanted to see more than an expression of regret.

"I am convinced that today our American friends are capable of a stronger reaction... than just the correction itself and the regret which we heard from the White House spokesperson," Mr Tusk said in a statement.

But Foreign Minister Radoslaw Sikorski was more forthright. "The White House will apologise for the outrageous mistake," he tweeted.

At the Medal of Freedom ceremony, President Obama spoke of Mr Karski's efforts to draw attention to Nazi crimes in Poland.

Mr Karski had travelled first to London and then to the US to tell wartime President Franklin Roosevelt what he had witnessed.

"Before one trip across enemy lines, resistance fighters told him that Jews were being murdered on a massive scale, and smuggled him into the Warsaw Ghetto and a Polish death camp to see for himself," President Obama said[.

Jan Karski later became professor of history at Georgetown University and died in Washington aged 86 in 2000.

Almost six million Poles died in World War II. More than half were Jews, many of them killed in Nazi death camps including the infamous Auschwitz-Birkenau camp.

Some 1.1 million people were killed at Auschwitz, including 300,000 Polish Jews.

Polish diplomats and overseas organisations have campaigned to stop the use of the phrase "Polish death camps" as a shorthand description of Auschwitz or Treblinka, the BBC's Warsaw correspondent Adam Easton reports.

"We should use this huge gaffe to make sure nobody, nowhere in the world, ever says that again," Polish Nobel Peace Prize winner Lech Walesa said.