Medvedev is now in charge of Russia's ruling party 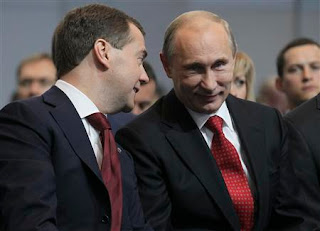 President Vladimir Putin steered Dmitry Medvedev into the chairmanship of Russia's ruling party on Saturday and demanded reforms to the flagging organization he will rely on to keep his grip on the country's far-flung regions.

At Putin's behest, delegates at a United Russia congress elected Medvedev chairman with a unanimous show of hands, the final step in a choreographed role reversal the longtime leader hopes will preserve his rule against growing opposition. After four years of playing No. 2 to his protege - when Putin was premier and led the party while Medvedev was president - the assertive performance by Putin on Saturday cemented his return to dominance as a single leader pulling the strings of power.

The event capped a series of moves to assert his authority over both security policy and the economic issues that are traditionally the province of the prime minister, the job Medvedev was given a day after Putin's May 7 inauguration.

Putin stole the show at a ceremony that formally celebrated Medvedev, hinting he ultimately remained United Russia's leader despite stepping back from formal ties with the party.

"I consider the United Russia party my key ally and partner - a force that is prepared to use all its opportunities to build a free, strong and thriving country," said Putin, 59, signaling continued support to a party that has been wary of Medvedev.

But he warned party members they must adapt to changing circumstances.