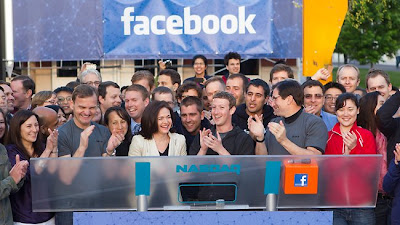 MARK Zuckerberg has come under fire for staying in the shadows in the wake of Facebook’s disastrous IPO.

Zuckerberg’s last public appearance was when he rang the Nasdaq opening bell the day the shares went public.

Apart from a wedding picture posted over the weekend, the Facebook chief has been missing in action.

In the five days since the company went public investor anger has been mounting over the deal which was fumbled by its major underwriters and complicated by technical problems at the Nasdaq stock exchange.

Trial lawyers are smelling blood as furious investors have begun filing suits over losses, with billions of dollars possibly at stake in coming litigation.

More than half a dozen law firms specialising in investor complaints said today they were launching class-action suits against the social networking giant and its underwriters.

The company’s share price has slumped 16 per cent below the $US38 listing price.

Susan Heron, CEO of the Australian Institute of Management for Victoria and Tasmania, said people were looking at Zuckerberg as a leader to give them clarity, answers and comfort.

“Facebook is the product and the brand and Zuckerberg is critically linked to the brand and it’s built around him,” Ms Heron said.

“People will look at Zuckerberg and think there’s no one in the world that can talk about this product better than you.”

Reports emerged today that Morgan Stanley and other major underwriters made around $US100 million by selling their extra allotment of shares to stabilise the share price on the first day of trading.

Yesterday, Zuckerberg completed the $US1.1 billion transaction of 30.2 million shares that he sold in the company's IPO, when he sold them for $37.58 a pop.

Zuckerberg has more of an obligation to be transparent since the sharemarket float, Ms Heron said.

“He’s got a public company now and he’s got to step up and meet his obligation to the public.

“Now people are saying give me the confidence that my investment is going to be worth something.”

Ms Heron said that blame also lies with the leadership team around Zuckerberg, who should have realised he needed to be stronger and more visible.

“Quite frankly the leadership team around Zuckerberg has failed, they haven’t done a good enough job,” she said.

“He should be working with his team and advisers that he used on the float and he should be coming out and filling the vacuum that is there on info and giving people the answers.”