London prepared to down airliners to safeguard Olympics 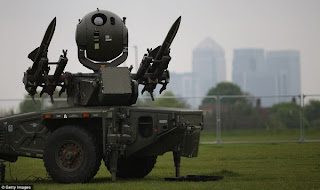 The UK Defense Secretary is ready to give the order to shoot down an airliner if he believes the Olympic Games are being threatened by a 9/11 style attack.

Speaking to the Evening Standard newspaper, Philip Hammond has said that he is prepared to do whatever it takes to protect London during the upcoming London Olympics. “The decision to engage would be made at the highest levels of government.”

When asked if he was personally willing to give the order to destroy a rogue aircraft that potentially posed a danger, he replied: “Of course…I’m certainly prepared to make decisions.”

Mr Hammond's comments came as Britain's security forces launched a multi-layered operation with the Navy following the Army and Air Force in showing off its military hardware ahead of the Games.
On Thursday, Royal Marine commandos held a huge exercise off the south coast and HMS Ocean sailed up the Thames to become a floating command centre.

Rapier surface-to-air missiles have also been showcased at Blackheath Army Cadet Centre in south-east London as part of the massive 2012 security test on land, sea and in the air, while earlier in the week Typhoon jets moved to RAF Northolt.

Colonel Jon Campbell, commander of the Joint Ground Based Air Defence, told the Daily Mail newspaper: “We have done as much as we can to allay people's fears."

“The Rapier system has world-class radar on it and is particularly good at picking up low and slow-moving objects in the sky. It means we're able to get the very best picture of what is happening in the skies of London.”

The Rapier missile has the power to take down a Boeing 747 full of passengers, if needed, to protect a stadium full of 80,000 Olympic spectators in a terrorism nightmare scenario.

The British military has insisted that the missiles, with a range of up to five miles, could be deployed as the last line of defence.