A large forest fire burns about 30 kilometres from Timmins 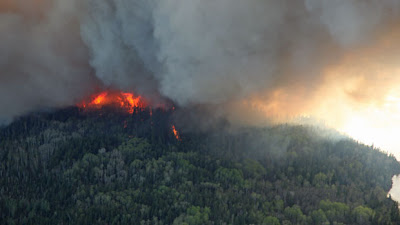 A change in weather is helping crews battling forest fires in northeastern Ontario, where strong, shifting winds have been fanning the flames and forcing evacuations.

Wind speeds as of Saturday morning were reported to be half what they were the previous day, Michelle Nowak, spokesperson with Ontario's ministry of natural resources told CBC News.

"Those strong winds have been blowing this [Timmins-area] fire since it started last weekend. We had very strong winds yesterday, gusting up to 60 km/h at times in the afternoon. Strong westerly winds really aggravated that fire and was blowing it eastward. But this morning, the winds have been cut in half," Nowak said.

"Now we're looking at a north-northeasterly flow for the wind, better for not blowing that toward the city of Timmins," she said, adding the fire is contained around 30 kilometres south of Timmins.

On Friday, the fire blanketed the Timmins area with smoke and ash and officials in the city of 43,000 declared a state of emergency. The flames, covering more than 300 square kilometres, forced 225 people out of their homes in rural areas around the community.

Reports of a new fire Friday along Highway 101 southwest of Timmins forced the evacuation of the Old Mill campground. At the same time, flames jumped Highway 144 southwest of the city.

Another forest fire has been threatening the community of Kirkland Lake, about 140 kilometres southeast of Timmins, forcing hundreds in rural areas to leave. The community itself, population 10,000, remains on evacuation alert.

"Due to the fires that started last Sunday and the long weekend we have had approximately 800 residents evacuated, including 194 from a First Nations community (Mattagami)," Nowak told CBC News.

Officials have urged people to visit the City of Timmins website and the Ministry of Natural Resources for updates on the fires.