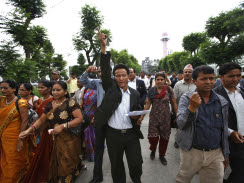 Leaders of Nepal's main political parties are meeting in a last-minute attempt to agree on a new constitution before a midnight deadline.

The four main parties are attempting to resolve differences over whether the states proposed in the constitution should be determined on the basis of ethnicity.

Thousands of supporters and opponents of the idea rallied outside the Constituent Assembly building Sunday. Thick police lines kept the two groups apart.

The assembly was elected to a two-year term in 2008 to draft a new constitution but has been unable to finish the task. Its tenure has been extended four times, but the Supreme Court has rejected any further extensions.

New elections will have to be held if the assembly expires Sunday without completing the charter.