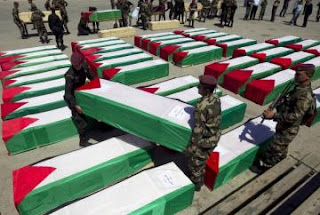 Israel has handed over to the Palestinian Authority the remains of 91 Palestinians who died carrying out attacks against Israel,some of whom died more than 40 years ago.

The transfer began before dawn, when Israel formally gave the bodies to the Palestinians at a location near the West Bank city of Jericho, with 79 of them immediately transferred to Ramallah, and the other 12 sent to Gaza. 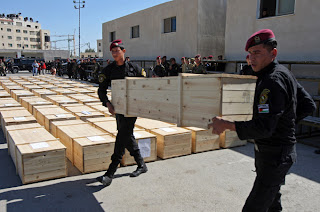 Special ceremonies will be held later, before the bodies are buried again.

According to Israeli media, Hamas will hold a full military service for the remains in Gaza, with each coffin receiving a 21-gun salute. They will then be shuttled to various towns for burial.

In Ramallah, rows of coffins have been draped in Palestinian flags outside President Abbas's compound ahead of a ceremony later today.

The dead are considered martyrs by Palestinians, but terrorists by Israelis, and their remains are used as bargaining chips, he says.

Earlier this month Palestinian prisoners in Israeli jails agreed to end a mass hunger strike, which had been going on for more than two months.

More than 1,500 Palestinians had been refusing food to demand an improvement in conditions.

There were fears of a violent Palestinian backlash, had any of the inmates died.