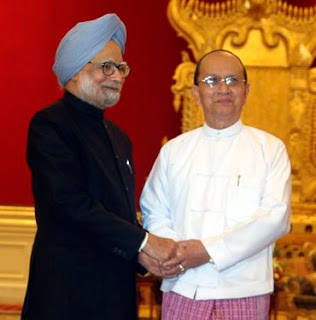 India signed a raft of agreements with Myanmar on Monday in the first visit by an Indian leader in 25 years, aimed at shoring up its presence as rival countries line up to do business with its strategically located neighbour.

Manmohan Singh held talks with Myanmar's reformist president, Thein Sein, in the capital Naypyitaw, where a $500 million line of credit to Myanmar was among 12 agreements signed, according to the foreign ministries of both countries.

Energy-hungry India is eyeing Myanmar's large oil and natural gas reserves and is eager to boost trade after a half-century of military rule left Myanmar isolated and heavily reliant on its other giant neighbor China.

“Stronger trade and investment links, development of border areas, improving connectivity between our two countries and building capacity and human resources are areas that I hope to focus on during my visit,” said Singh in a statement Sunday before departing on the trip.

Singh, who touched down in the capital Naypyidaw late Sunday, will meet Thein Sein on Monday. He arrived flanked by Indian journalists who traveled with him on the Air India flight and was met by senior Myanmar officials.

He will travel to the main city of Yangon for talks with Suu Kyi on Tuesday, in a move seen as a sign that India wants to reaffirm ties with the veteran activist.